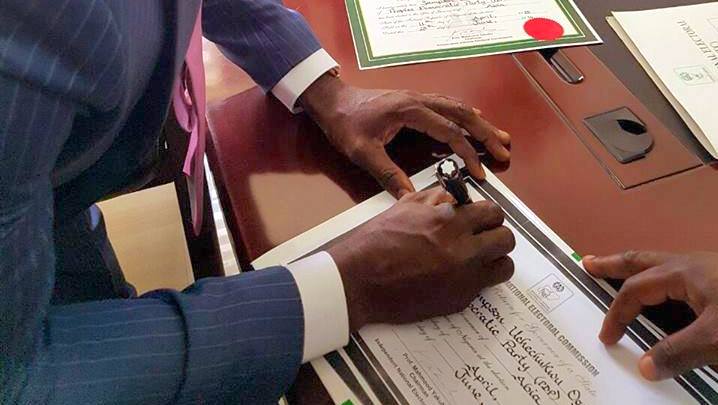 Ogah appending his signature to a document at INEC office

Sampson Ogah, the man who was declared Abia governor by the Federal High Court and issued a certificate of return by INEC on Thursday, has insisted on being sworn in as governor of the state despite an injunction by the Abia State High Court forbidding the exercise.

He also said he was on his way to Umuahia, the Abia State capital, to be sworn in as governor.

Mr. Ogah said through his Media Adviser, Monday Ubani, that the injunction obtained by Mr. Ikpeazu could not invalidate the certificate of return as it came from a subordinate court to the Federal High Court that ordered his swearing in.

He maintained that the State High Court which granted the injunction lacked the locus to do so adding that only an Appeal Court could grant such injunction.

He also said the appeal filed by Mr. Ikpeazu at the Court of Appeal could not be considered a stay over the judgment of Justice Okon Abang.

Mr. Ogah urged the chief judge and all concerned to respect the ruling and allow him to immediately take over the reigns of leadership so as to move the state forward.

The statement reads: “The Federal high court of Abuja presided over by Justice Okon Abang ordered Dr Okezie Ikpeazu to vacate his seat for Dr Uche Ogah OON as the rightful person for the seat. INEC was ordered to issue the said Ogah with a certificate of return which that body has complied with”.

“The next order that was issued by the federal high court was for the Chief Judge of Abia to swear in Dr Uche Ogah, the rightful person to occupy the governor’s seat. That order is yet to be complied with”.

“I understand that a high court in Osisioma Ngwa the axis where the governor hails from has issued an interim order restraining the Chief Judge from swearing in Dr Uche Ogah as the governor of the State. The point must be made that this order cannot stand as it is invalid in law”.

“The order did not emanate from a higher court but from a court of coordinate jurisdiction and does not in any vitiate or invalidate the earlier judgement of the Federal High Court in which the Chief Judge of Abia State was ordered to swear in Dr Uche Sampson Ogah. Only a higher court, in this case Court of Appeal has the jurisdiction to reverse the judgement of the Federal High Court”.

“Note also that appeal of Dr Okezie Ikpeazu before the Court of Appeal does not operate as a stay over the judgement of Justice Okon Abang. In the absence of any express order of the high court or the court of appeal ordering stay of execution, the judgement of the Federal High Court delivered on the 27th of June, 2016 should be obeyed by all the parties.”

Speaking through another aide, Peter Agba Kalu, Mr. Ogah said he was on his way to Umuahia, the Abia State capital for swearing in.

He said, “We are entroute to Umuahia for the swearing in from Imo Airpot.

“We don’t believe there is an injunction like that. The injunction is baseless and against the rules of the judiciary”.

“We also have a directive by the CJN that he should be sworn in immediately. So that injunction to the best of our knowledge does not exist and where it exist is null and void because it has already been overtaken by events.”