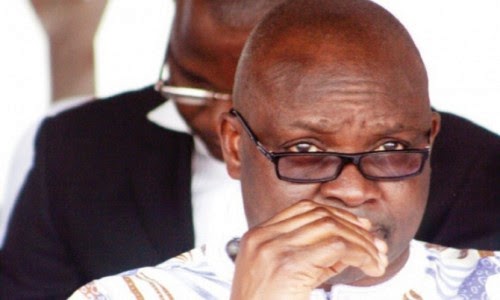 Abiodun Agbele, a close aide of Governor Ayodele Fayose has been arrested, insiders at the Economic and Financial Crimes Commission have told PREMIUM TIMES.

Mr. Agbele was arrested in Lagos by operatives of the EFCC who had been on his trail in the past one week over allegations that he received huge public funds from former Minister Musiliu Obanikoro and delivered same to Mr. Fayose.

He is currently being detained at the Lagos office of the anti-graft commission, this newspaper learnt.

When contacted, the spokesperson for the EFCC, Wilson Uwujaren, said he had not been briefed on the arrest.

Lere Olayinka, a spokesperson for Governor Fayose, however, confirmed the arrest.

In a statement sent to PREMIUM TIMES, Mr. Olayinka said, “Our attention has been drawn to the arrest of Mr Abiodun Agbele by the EFCC and we wish to say that we encourage the EFCC to carry out its investigations without politics as it is being done now.

“It must be pointed out that at no time was Mr Abiodun Agbele invited by the EFCC, and if he had been invited, he would have honoured the invitation. Therefore, there is nothing to celebrate in his arrest if it is not political.

“As already pointed out, Governor Ayodele Fayose does not have anything
to do with any fund from the Office of the National Security Adviser (ONSA). He has stated how his election was funded and Zenith Bank that he said funded his election has not denied doing so.

“Also, the person said to have been arrested is an adult and will defend himself when the time comes. Subjecting him to media trial as EFCC has been doing since the inception of this government will only give our adversaries momentary sense of joy.

“We await reports of EFCC investigations and we hope that the anti-corruption agency will be civil enough to allow an open and transparent trial in competent court of law and not media trial just
to get at Governor Fayose because of his uncompromising stance against the misrule of the APC/Buhari led federal government.

“Whatever stories being circulated by the EFCC and its political allies can at best be regarded as rumour as we were all in Nigeria when Nigerians were told that $700m cash was found in the House of Mrs Diezani Allison Madueke and the story turned out to be lie.

“Finally, like we have maintained, Governor Fayose will remain resolute
in making his opinions known on national issues and will not be
intimidated.”