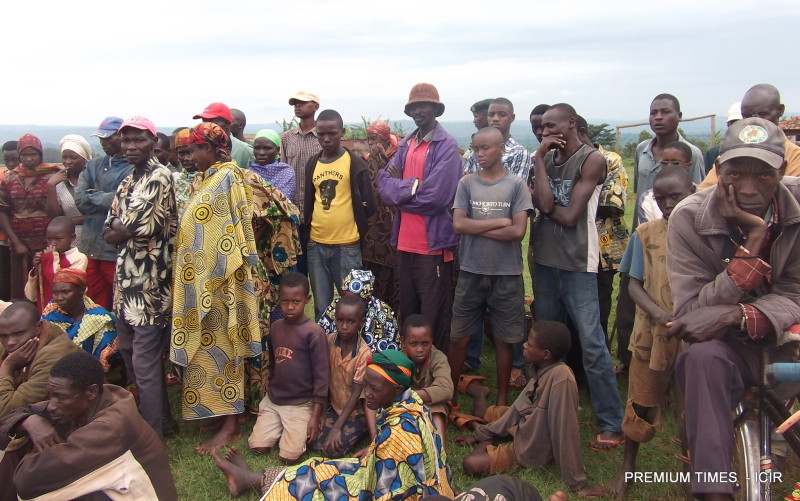 Officials of the Borno State government in charge of administering foods and other relief materials for Internally Displaced Persons (IDPs) are in trouble for allegedly re-bagging and diverting rice donated by philanthropic organisations and well-meaning individuals.

Thousands of IDPs in over 20 camps around Maiduguri, the Borno State capital, are left hungry as officials enrich selves from the sales of diverted food meant for IDPs.

Many others have died of starvation while hundreds have been hospitalised.

Borno State Governor, Kashim Shettima, on Friday directed the police and the State Security Services to go after officials involved in the act.

The governor’s spokesperson, Isa Gusau, said Mr. Shettima’s directive followed the circulation of video clips and still pictures on the social media showing bags of rice purportedly from NEMA being re-bagged by officials of the Borno State Emergency Management Agency.

Mr. Shettima spoke at a meeting with heads of all security and para-military organisations in Borno State shortly after he held the traditional iftar (breaking of fast) with them at the Government House on Friday night.

Mr. Isa added that the governor described those who circulated the video as a group of Abuja-based politicians from Borno State bent on bringing down his administration.

But critics said the governor’s directive came a bit late because the action of thieving officials had already led to the death of several IDPs, some of whom perished from starvation and malnutrition.

In Bama town, 75km away from Maiduguri, hungry and malnourished IDPs die on daily basis because of inadequate food supply, those familiar with the matter said.

Governor Shettima had to visit Bama camp after receiving report that IDPs were dying rapidly due to lack of care and proper nutrition.

At the camp, the governor saw how hungry IDPs were left unattended to even as fresh corpses of persons killed by hunger were being buried, his aides said.

The governor had to quickly direct officials of the state ministry of health to move 61 persons with acute condition of malnutrition to the intensive care unit of the Umaru Shehu Ultramodern Hospital, Maiduguri, to save them from dying.

Another set of 478 children, alongside 219 adults with lesser cases of malnutrition, were also moved to a special care unit for proper feeding and medication, officials said.

Sources in Bama said before the governor’s visit on Wednesday, bodies wrapped in mats and being moved for burial were common sights at the camp “almost on daily basis.”

“We have lost count of people that have died so far in this camp”, said a concerned local camp official. “It was really a messy situation when you have to pick corpses of malnourished persons everyday; sometimes some of the dead ones may not even be discovered on time.”

“The theft is not restricted to food items alone, medical drugs, toiletries, beddings and wrappers have been diverted to the market and sold by greedy officials.”

Meanwhile, the Borno State Chairman of the State Emergency Management Agency (SEMA), Ahmed Satomi, has been summoned by the state’s House of Assembly to explain why Internally Displaced Persons are dying of malnutrition everyday in various camps managed by the state government.

Mr Satomi is also to answer questions on the alleged diversion of relief materials.

The Assembly had on Thursday issued a 24-hour ultimatum for the SEMA boss to appear before a seven-man ad hoc committee on the alleged diversion and repackaging of relief items donated by Dangote Foundation and other humanitarian agencies for feeding the about 1.5 million Internally Displaced Persons (IDPs) in the state.

The lawmakers are also seeking explanation regarding the multiple deaths at the camps, especially in Bama.

The Chairman, House Committee Verification on the plight of IDPs, Mustapha Ngala, who led other members to the office of SEMA Friday told journalists that his committee was mandated to go round IDP camps to see if there were any gap in feeding and welfare need of victims of the Boko Haram insurgency.

“We have gone round most of the camps to see things for ourself and report back appropriately to the House and the authorities, we have been to Dalori Camp I & II, Bakassi Camp, Shettima Ali Monguno Camp among other resettlement camps,” Mr. Ngala said.

“We have had discussions with those managing these camps and the victims themselves (IDPs). We have not concluded our findings to tell you what we have gathered yet, but very soon, when we are through with our findings, we are going to tell the public.”

Mr. Ngala however said the state assembly was displeased with the “series of allegations bothering on corruptions and lapses in SEMA”.

Efforts by this newspaper to track down the SEMA chief executive for comments on the allegations against his agency and staff were unsuccessful.

Mr Satomi failed to keep a promise to revert as soon as he was done with an assignment he was handling.

SAD NEWS: Cancer Patient, who was decaying alive, passes on