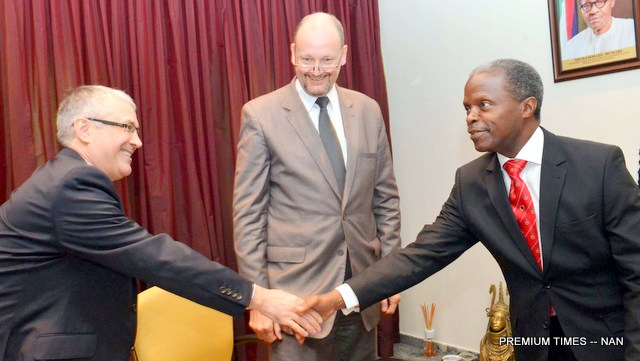 The Federal Government on Monday said it had evolved two strategies – engagement and security – to halt attacks on oil installations in the country as a result of the renewed insurgency in the Niger Delta region.

Vice President Yemi Osinbajo disclosed this on Monday at the State House during a meeting with a delegation of the European Union, led by the EU Ambassador in Nigeria, Michel Arrion.

The renewed insurgency in the oil-rich region has impacted negatively on the economy, affecting gas supply to power plants and drastically reducing the country’s oil production to as low as 800,000 bpd.

Mr. Osinbajo said government was engaging leaders and people of the Niger Delta regarding the spate of attacks on oil installations, an act he described as economic sabotage.

But besides reaching out to the people of the area, Mr. Osinbajo assured, government was also beefing up security in the region.

Mr. Osinbajo added that “government is working round the clock to minimize the losses arising from the attacks.”

‘We are talking, we are ensuring that we minimize losses and we are stepping up security. We are also engaging the international oil companies, IOCs, to see what options exists,” Mr. Osinbajo said.

According to him, the focus of the Buhari presidency “is to ensure that the man on the street in the Niger Delta receives the benefit from all that is available there.”

He also called on leaders in the region to be accountable to the people.

Further on economic issues, the Vice-President restated government’s commitment to driving its diversification policy and encouraging investors from European countries to take advantage of the situation especially in the agro-allied processing industry.

He restated the determination of the administration to ensuring that Nigeria’s ranking in the World Bank ease of doing business survey goes up by at least 20 steps.

To this end, he said the President had approved the composition of a Presidential Commission on the matter to be chaired by himself, the VP, and the Industry, Trade and Investment Minister, Okey Enelamah, as Vice Chairman.

“In the next few months, we should be seeing some changes,” he said.

Mr. Osinbajo also commented on the failure of the government to disclose names of those who returned loots.

Releasing the names of persons from whom the Federal Government recovered looted funds and assets may jeopardize ongoing investigations, Mr. Osinbajo said.

While the government released a list of sums of monies and assets already recovered in the last one year, names of individuals involved were not included.

“We have released the list of recovered loot, we know people are asking for the names, but releasing the names may jeopardize ongoing investigations,” the Vice President said.

Earlier, Mr. Arrion said he came to consult the Vice President as a follow-up on President Buhari’s meeting with EU leaders during his visit to the continent, adding that “Nigeria has a huge market we can invest in. It is also a place we can export from.”

Both Mr. Osinbajo and the European Union envoy also discussed the EU trade deal with ECOWAS, the Economic Partnership Agreement (EPA), which was also one of the main issues tabled at the meeting of West African leaders over the weekend in Dakar.