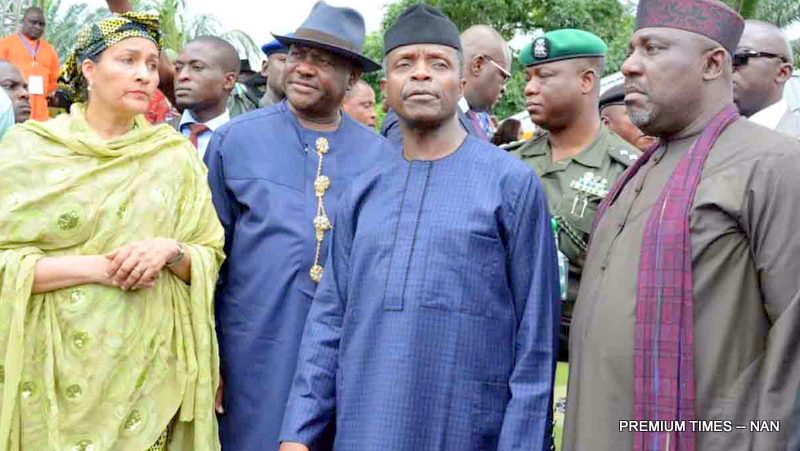 FILE PHOTO: FROM LEFT: Minister of Environment, Mrs Amina Mohammed; Gov. Nyesom Wike of Rivers; Vice President Yemi Osinbajo and Gov. Rochas Okorocha of Imo, at the Launch of the Clean-Up of Ogoniland And Other Oil-Spill Affected Communities In The Niger Delta at Bodo Town, Gokana Local Government Area of Rivers on Thursday (2/6/16)

President Muhammadu Buhari on Thursday backed off a proposed trip to Rivers State for the kick-off of the cleanup of Ogoni, delegating Vice President Yemi Osinbajo for the exercise.

The president cancelled the event even after his advanced team had already arrived Ogoni.

The presidency has yet not given any reason for the last-minute cancellation of the trip, which was the second time in less than two weeks that Mr. Buhari would cancel a scheduled event outside Abuja.

On the night of May 22, the president suspended his scheduled official visit to Lagos State fixed for the morning of Monday, May 23, citing “scheduling difficulties” as reason.

Mr. Osinbajo was then detailed to proceed to the nation’s commercial capital to represent Mr. Buhari at the planned presidential working visit.

The clean-up of the heavily polluted Ogoni land was recommended by the United Nation Environmental Programme, UNEP, in its report in 2011.

At the event at Bodo, Gokana Local Government, attended by Gov. Nyesom Wike of Rivers State, ministers, and a UN representative, Mr. Buhari, whose address was read by Mr. Osinbajo, warned that the Federal Government would no longer tolerate the current theft and illegal refining of crude oil in the Niger Delta.

He urged the regulators of oil industry to carry out their responsibilities in line with best practices.

“The current oil theft and illegal refining will not be tolerated. The regulators in the oil industries must live up to expectations.

“They must ensure that oil companies carry out their operations in line with universal best services,’’ he said.

The president said the government was laying a foundation for change to ensure the rule of law and safety of the people.

He said the aim was to diversify the nation’s economy and provide jobs and wealth for the people.

According to him, the clean-up of Ogoniland will have sustainable development components will benefit the people.

“The methodology for the clean-up will ensure job creation for young people. The agro-allied industries required for processing of agricultural produce will also be put in place,’’ the president said.

Mr. Buhari also said that approval had been given to set up necessary institutional framework to drive the implementation of the UNEP Report.

Gov. Wike commended Mr. Buhari for launching the implementation of the UNEP Report on Ogoniland.

He said the state government would provide the platform for the smooth implementation of the Report.

The governor said that environmental degradation had affected ecosystem and wild life of communities in the Niger Delta.

The minister of Environment, Amina Mohammed, said the government had taken stock of the work done in the past to start the implementation.

Ms. Mohammed said the implementation “requires transparency, accountability, genuine partnership and proper representation of the people at the grassroots in what we are doing in investing in their future”.

Achim Steiner, Executive Director of UNEP, said the UN would stand with the Nigerian government to ensure the implementation of the Ogoni report.