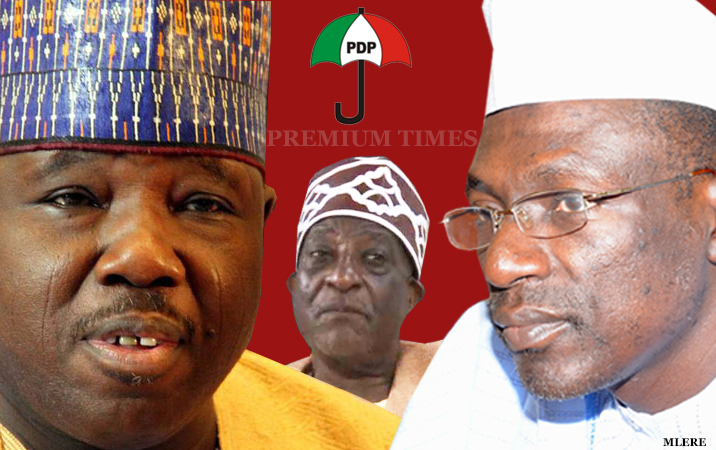 The crisis rocking the opposition Peoples Democratic Party (PDP) assumed a new dimension Wednesday, with the party’s Board of Trustees (BOT) saying it had taken over the leadership of the party pending the resolution of the leadership tussle in the fold.

Mr. Jibrin said consequently, the BOT had taken over the running of the party.

He said that the action of the BOT became imperative in order not to allow vacuum in the party’s operations as well as to resolve the leadership crisis within the party.

“Today, the BOT remains the only legal body now in the whole set up and that is why we are here to play our role,” Mr. Jibrin said.

“We are not here to take over the secretariat. We are here to perform our duties as enshrined in the constitution, hoping that our problems will be resolved soon.

“We, the BOT have taken it upon ourselves to ensure we play a great role in resolving the problems.

“We have gone very far in resolving them. We have made some contacts and consultations.

“We are not here to cast blame on anybody. If it means to go to anybody to solve the problem, we will do so.’’

He said the BOT had been receiving great cooperation from elders and leaders of PDP for it to do its job.

Mr. Jibrin, who said that the board would play its role without fair or favour, assured that the BOT would do its best to return normalcy to the party.

“The PDP has come to stay. PDP will never die,” he said. PDP will continue to rule.

“We are only on sabbatical leave and once the sabbatical is over, we are going to take over our leadership because it is our own. We are going back in 2019. But we can only do that if we cooperate and unite.’’

Mr. Jibrin, however, commended the Nigeria Police for securing the party’s secretariat by barricading access into it.

“At this critical moment, what we need is to secure our property, to safeguard your lives, and to allow members of staff of the party to work under a very good atmosphere.

“We, the BOT are entrusted under the constitution of our party to be in charge of the assets and liability of PDP.’’

Mr. expressed optimism that the party would meet the Independent National Electoral Commission (INEC) deadline on submission of the party candidate’s nomination form on the forthcoming Edo state governorship election.

“We are putting our heads together with our lawyers,” the BOT chairman said.

“We are rest assured that everything would be in order very soon, with the reconciliation that is going on which will not last long.’’

On his part, the BOT Secretary, Ojo Maduekwe, said the BOT intervened because of litigations surrounding the national caretaker committee set up in Port Harcourt on May 21, at its national convention.

“Concerning the national caretaker committee, the matter is being resolved.

“It will either be resolved by negotiation or by vacating the court orders. We will prefer the matter is resolved internally,’’ Mr. Maduekwe said.

He said that the biggest impunity was for any party member to go to court on any issue without engaging internal mechanism in addressing it.

Members of staff of PDP who were blocked for over a week were allowed access to their offices on Tuesday by the police who had barricaded the secretariat since May 22.