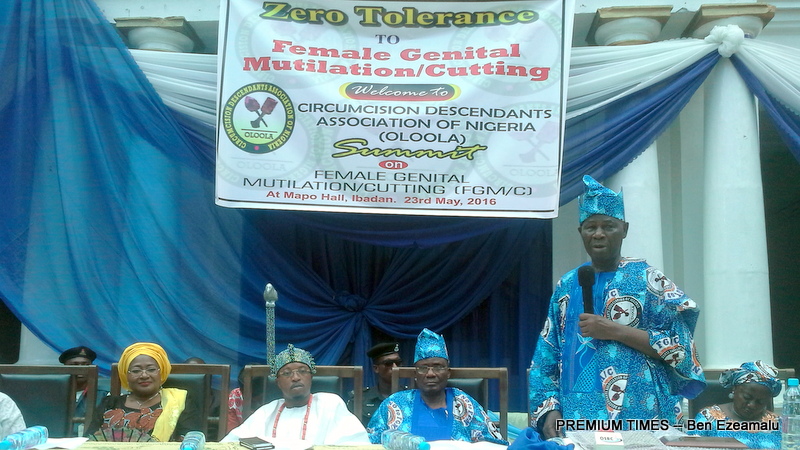 The Circumcision Descendants Association of Nigeria have advocated the provision of alternative means of livelihood for their members as a way of curbing Female Genital Mutilation practice in south-west Nigeria.

At a Summit‎ to End FGM in Nigeria held in Ibadan, Monday, the group said the FGM agenda would be difficult to achieve without the “full involvement” of their members.

“The practice of Female Genital Mutilation/Cutting (FGM/C) has generated heated debates in the international development arena as an issue linked to women’s rights and gender inequality,” said Abiola Ogundokun, Chairman, Board of Trustees, of CDAN.

“However, it is noteworthy that unknown to the NGOs and principal actors of the FGM campaign, the registered CDAN is equally committed to the same campaign and agenda of the United Nations as contained in our constitution.

“It is unfortunate that the desired efforts of the association have not been utilised for the successful advancement of the project in order to bring the act to an end. Hence the need of this timely proposed summit.”

Mr. Ogundokun, a magazine publisher and politician, said CDAN had made repeated attempts to collaborate with NGOs in the past but failed due to “lukewarm attitude of some of the NGOs.”

“To eradicate FGM from the South West zone of Nigeria and further penetrate other regions, we need to do a lot more. We should increase community awareness and knowledge on the health hazards associated with FGM.”

Scores of CDAN members across the South West, donning uniformed local attires inscribed with ‘Say No to FGM,’ attended Monday’s summit where they watched video clips on the hazards of female circumcision.

Mr. Ogundokun said several deliberations within the rank and file of CDAN membership had resulted in a majority decision for the approval of zero tolerance to FGM.

“We so hereby declare our resolution that ‘A Total Stop to FGM/C’ is now in place and we encourage the fullest cooperation of all members and to be obedient to this decision jointly agreed upon,” he said.

“I will however like to appeal to both government and organizations connected to this campaign worldwide to look at the other side of the profession that has been earning us economic support.

“To also consider the need for support to this family whose source of livelihood is being taken from them in a manner that will provide alternative sources of income to alleviate the possible economic effect that may likely affect their families.

“As this is the case of demand and supply, it is definite that the refusal of the supplier will bring an end to the demand.

“Government should also consider a programme for the circumciser’s family to limit the effect on the loss of revenue.”

‘Money is the reason’

‎Gift Abu, a nurse and activist, said native customs contribute to the practice of FGM across the country.

“So if we get to them first, and get their consent for them to drop their knives and accept the campaign, then FGM will be history.”

Ms. Abu said the campaign succeeded in convincing about 70 percent of the circumcisers to stop the practice, with the remaining ones being reluctant to follow suit.

“But I think with this summit, others will join the campaign as well,” she said.

“There is a very peculiar reason (for their reluctance), for the women.

“And then, the monetary aspect of it. They do it for money, it’s their livelihood. They’ll tell you it’s what keeps my family, it’s what I use in training my children and feeding.

“So money is very important for those who don’t have what to do. Some of them don’t have any other thing they are doing apart from circumcision. It’s like a profession to them. So leaving the practice, it’s like where will they start from?

Gboye Otunla, Organizing Secretary, CDAN, said the summit provided an avenue to show their willingness to collaborate ‎with NGOs and others to end FGM.

“But one thing we want them to know, that’s why we organized this, you cannot do this thing effectively without involving the circumcisers,” Mr. Otunla said.

“Because they don’t know…, people take their children to them.

“If we can persuade them, that those things are no longer good. That is what we have done in our meetings. And we have gotten convinced that we should cooperate with the whole world. This thing should be totally eradicated.”