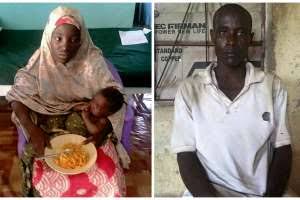 Acting General Officer Commanding 7 Division, Victor Ezugwu, a Brigadier General in the Nigerian Army, performed the handing over in a brief ceremony.

MS. Ali was handed over alongside her baby and supposed husband, Mohammed Hayatu.

The Acting Director, Army Public Relations, Sani Usman, a colonel, said prior to the handing over, they were medically examined at an Air Force medical facility in Maiduguri and were found to be stable and with normal blood pressure.

The trio were later airlifted by the Nigeria Air Force Super Puma aircraft from Damboa to Maiduguri for the formal handing over to the government by the army.

Mr Usman said the girl and her baby, along with her parents, would be conveyed to Abuja on Thursday to meet with President Muhammadu Buhari.

According to the military spokesperson, the supposed ‘husband’ was undergoing further interrogation at the Joint Intelligence Centre in Maiduģuri.

Mr. Usman said Mohammed Hayatu, was being well treated in line with the rules of engagement of Operation LAFIYA DOLE.

Over 219 girls were abducted by Boko Haram from their school hostel in 2014, and Ms. Ali is believed to be one of them.

Some of the girls managed to escape.
The abduction attracted global attention and the Nigerian government said that efforts were being made to rescue the girls alive.

The BBC quoted Hosea Abana Tsambido, the chairman of the Chibok community in Abuja, as saying that Ms. Ali was found by the vigilantes after venturing into the forest to search for firewood.

After she was taken to Chibok, where she was identified by her parents, Ms. Ali reportedly told community leaders that “all the girls are in Sambisa forest, but six of them had died”, a source told PREMIUM TIMES.