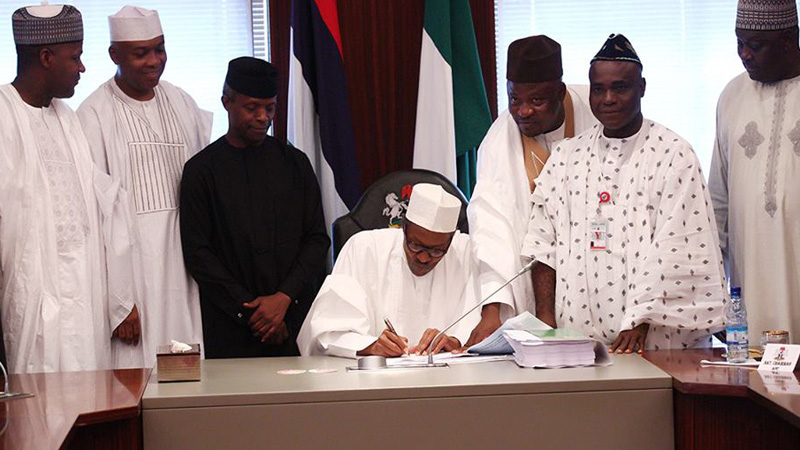 The 2016 Appropriation Act signed by President Muhammadu Buhari on Friday will run until May 2017, an official has said.

“The Act provides that the budget takes effects from the date assented to by the president, and run a full course of 12 months,” said Mr. Enang, a former lawmaker who once chaired the Senate Committee on Rules and Business.

“So, as the president assented to this budget on the 6th of May, 2016, this budget will last and expire on 6th of May 2017. This is an ingenious introduction by the National Assembly to ensure that there is full implementation of the budget.”

On Sunday, Mr. Enang thanked Nigerians for their patience during the budget crisis, and praised the Senate and the House of Representatives members whom he said demonstrated bi-partisanship during the controversy that trailed the exclusion of the Lagos-Calabar rail project from the budget.

“I want to thank the Senate Minority Leader, Godswill Akpabio, and members of the PDP in both the Senate and the House of Representatives. They were bi-partisan, and they worked like one Nigeria,” he said.

Mr. Enang said apart from the Lagos-Calabar rail project, there was another big project in the budget for residents of Cross River and Akwa Ibom. This, he said, was the proposed construction of a dual carriage-way along Odukpani-Itu-Ikot-Ekpene Highway which links the two South-South states together.

“I would want to call it the legacy project,” the presidential aide said, adding that N6 billion has been provided for the take off of the road project in the 2016 budget.

“The road will ease the suffering of the people,” he said.

Mr. Enang also told the journalists that the president has not introduced any grazing reserve bill to the national assembly. His statement on the controversial bill is in tandem with that of the Deputy Senate President, Ike Ekweremadu, who last week denied such bill exists. The bill was rumoured to contain provisions that will mandate creation of grazing reserves for herdsmen in all the states of Nigeria.

The presidential aide, however, said a similar bill was introduced as a private member bill in the last Senate when he was a member.

“My contribution to the debate then, which could be found in the hansard of the senate, was that the question of grazing was for each state.

“It is not something the federal government can regulate in each of the states,” he said. “It is only the house of assembly of each state that can regulate it.”

The former senator mentioned the personal lessons he learnt during the budget crisis to include speaking less, and working more.

“Two, explain to your boss, your employer, and the people who are expecting results from you, how difficult it was to attain and bring a result, and not why result was not brought.

“The experience is that, no matter how hard a thing is, work through it, and when your wit seems to be running out, pray, and work harder.”

CAN should not be political – Catholic cleric