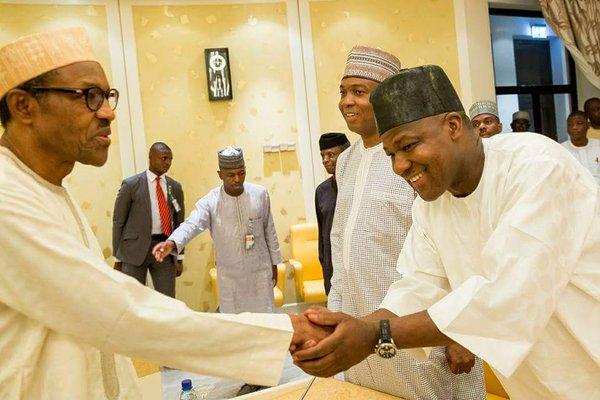 President Muhammadu Buhari on Tuesday night held a closed-door meeting with the leadership of the National Assembly to find solution to the 2016 budget impasse.

The president later returned the document to the Assembly, saying some grey areas needed to be reviewed.

Mr. Buhari had earlier on Tuesday met separately with the Speaker of the House of Representatives, Yakubu Dogara, before an enlarged meeting involving the President of the Senate, Bukola Saraki, and other principal officers followed.

The meeting was held at the Presidential villa, in Abuja.

Mr. Saraki, who spoke briefly with State House correspondents after the meeting, said the executive and legislative arms had now found a way of resolving all the grey areas in the budget.

He said a committee to carry out the task was formed with membership drawn from both the presidency and the National Assembly.

“We came to work out the solutions that we found in moving the budget process forward and we are happy to say that we have agreed on the way forward, and we believe that this process will be completed in a matter of days rather than weeks,” Mr. Saraki said.

The Senate President also said in a matter of days, the budget would be ready for the president’s assent.

Mr. Saraki added that the committee formed “will engage over the next few days, to just tidy up a few loose ends and ensure that the outcome is satisfactory to everyone.”
The Minister of Budget and National Planning, Udoma Udo Udoma, who was also at the meeting, confirmed that the two arms of government “resolved all issues”, adding that an agreement was reached on the modalities of resolving the issues.

“It was a very good meeting, very positive and within the next few days all issues will be resolved,” Mr. Udoma said.

“We are working together, both the executive and the legislature, to sort those things out and within the next few days all matters will be resolved,” he said.

University of Ibadan shut over students protest,  as crises spread in Nigerian varsities