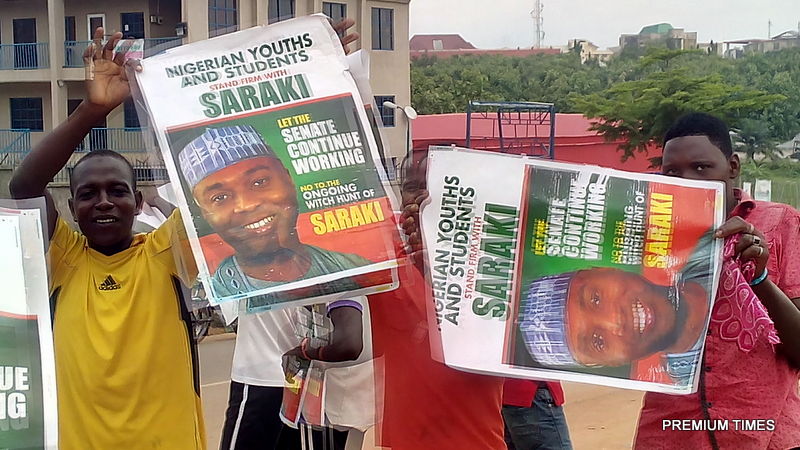 A number of protesters have camped around various parts of Jabi District of Abuja, on the road leading to the Code of Conduct Tribunal, to declare support for the President of the Nigerian Senate, Bukola Saraki, whose corruption trial resumed Monday morning.

Mr. Saraki is standing trial for alleged false assets declaration and fraud at the tribunal. His trial began in September last year.

The protesters carried placards with various inscriptions such as “Nigerian youths and Students stand firm with Saraki,” “Let the Senate Continue Working,” and “No to the ongoing witch-hunt of Saraki.”

They also chanted slogans such as “Sai namu mai gaskiya” in Hausa language, meaning “Our man is a person of truth”.

When approached by a PREMIUM TIMES reporter, the protesters declined interviews.

They however brandished their placards more clearly while saying, in Hausa, that Mr. Saraki remained a man of the people, who should be allowed to do his work.

Mr. Saraki arrived the court at 10:05 am, amidst chants of “Oloye” by his supporters.

The Chairman of the tribunal, Danladi Umar, arrived the court at 10:20 am, and hearing in the case began.

A counsel to the prosecution, Gabriel Esedine, asked the court to stand down for one hour, to allow the lead prosecution counsel, Rotimi Jacobs, attend to another matter at the Court of Appeal.

The Tribunal Chairman, Mr. Umar, objected to the application, saying the Administration of Criminal Justice Act (ACJA) does not allow for undue delay once a trial has started.

But the lead defence counsel, Kanu Agabi, pleaded with the tribunal to allow trial resumes after Mr. Jacobs’ return.

During the last hearing, a prosecution witness, Micheal Wetkast, alleged that Mr. Saraki continued to receive salaries and allowances as Kwara governor four years after the end of his tenure.

Since the beginning of the case, various groups have risen for, and against the trial.

The Deputy National Publicity Secretary of the All Progressives Congress, Timi Frank, lambasted the leadership of the APC for sitting “on the fence and watch Mr. Saraki swim or sink in his trial.”

Also, senators in support of Mr. Saraki rose in his defence on April 6, saying they will resist any attempt to impeach their leader.

The seven sporting events that caught our attention last week