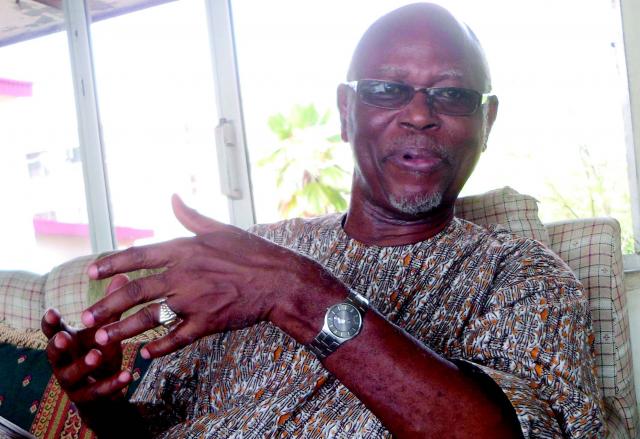 The National Chairman of the ruling All Progressives Congress, John Odigie-Oyegun, in this brief chat with PREMIUM TIMES’ Festus Owete and Hassan Adebayo, speaks on the state of the party, the corruption trial of the senate president and other issues.

PT: Almost one year after your party came to power, there is still public outcry. There is hardship. Are you aware? What’s your take on this?

Oyegun: It is very unfortunate. But Mr. President is determined. It is unfortunate that the problem is much worse than we expected; much worse in the sense that we have to develop process that will truly produce jobs; that will truly produce progress. We really want to avoid blaming the past because people no longer want that; they just want these conditions to change. But we still must face the reality. For instance, I don’t think there is one Nigerian that is not aware of heavy expenditure on electricity that did not result in improved supply. Sixteen years of mismanagement added to the collapse of oil caused the problem. But I assure you the president is very determined to bring the change.

But you can’t blame Nigerians for the outcry. The wife of a man who was bringing N100 home before but now brings N40 will fight. Every single member of the family will feel it. That’s the situation with Nigerians. But Nigerians must also be aware that that those people who hold the country to stranglehold are fighting back. Corruption is fighting back very massively. Look at the issue of fuel scarcity. Even as a party, we had to call the minister of state for petroleum resources. We asked “how do we explain all this?”

PT: The revelations were frightening?

Oyegun: Yes, frightening! But I was elated by that fact that in another few years, even before our first tenure ends, we could even become a net exporter of refined oil. So, the Buhari administration is not just planning that people don’t queue again; we already planning for full availability of products. But beyond, we will ensure refineries go back to work. And other refineries from the private sector are coming.

So we appeal; our new orientation is that Nigeria changes to a producing economy from a consuming one.

PT: So, you are aware Nigerians have not felt the change you promised?

Oyegun: We are aware. But you know change is a process. Change is progressive. You see, by the hardship people are going through, if you start explaining what “change” is, it will be like you don’t have feelings. Change is not just about fuel. Change is about how we think; our approach to issues. It is a massive undertaking. When the process fully completes, we will have a totally new Nigeria. One doesn’t want to use all these words our people have abused – “I am not a magician” and all that – but look at the fact of total mismanagement of resources, added to collapse of oil price. The reality is that change is a process. It’s not just about fuel queue has disappeared. It is our determination to combat forces which are ready to see people cry to make money. That’s why we have to go through the challenges but just for short moment. How we explain this to Nigerians is what I don’t know?

PT: You keep talking about the past. Nigerians knew all of that before they voted your party. Why can’t you just move forward?

Oyegun: Isn’t that the situation? We will move forward. But the aches and the pains by the PDP must not be run away from. You can’t close your ears to it. It is fact and reality. Please help us explain this to the public. Oil price dropped from over $100 to over $20 at some time. Where do you get FOREX when oil accounts for 95 per cent of your foreign earnings?

PT: Will the budget, when signed into law, make things improve?

Oyegun: Yes. At least a little snippet of what is there has come out to the public; Lagos-Calabar rail project and so on. These are heavy projects. These are projects that will bring hope. People will say “well, I am suffering now but I have hope” when these projects begin.

PT: A major issue currently is the trial of the Senate President, Bukola Saraki. A section says political solution should be deployed. Do you want to talk about this bearing in mind that the PDP is planning to take the position if Saraki is removed?

Oyegun: We don’t take anything for granted. As they are planning, we are also planning. The situation is under control. The whole situation is unfortunate but it is real.

What political situation in a legal matter? Are the judges politicians? The President is certainly not the type who will interfere in a judicial matter. I think we know him well. Everybody must know him. Things must be done normally. And that is part of the change mantra that we must play by the rule so that we don’t truncate processes.

People don’t seem to internalize what change is. If the President says “court, free that man”, the same president can say “court, imprison that man.” Is that the Nigeria you want? No! Change means allowing the law to take the proper course. I can tell you the President won’t interfere. The President is straight definite, straight and firm in all facets.

PT: So, you are not bothered that you can lose the seat of President of the Senate, should Bukola Saraki be removed because of your narrow majority?

Oyegun: Well, I don’t think we will lose that position. But sometimes, for change to take place there is price you have to pay. So losing the position may be sacrifice for change.

PT: Is there any infighting in APC?

Oyegun: There are differences in views. Interests differ. Some feel they are not sufficiently rewarded or consulted. So, it happens. We are just barely one year in power.

PT: We ask this because Timi Frank, the deputy publicity secretary of your party, will issue a statement today making some allegations and tomorrow, you will see the national secretary of the party issue another position.

PT: Can’t you call him to order?

Oyegun: That is being done in a way. If you can’t toe the party line fully and you think on certain issues you can speak as individual, it’s not done. You can’t do that. I am the Chairman, I can’t do that. Otherwise, people take it for party position. And that’s what the press is doing today. Timi Frank talks about his personal views and they still put that tag that APC deputy national publicity secretary has spoken, which is not.

PT: Why is it difficult to replace Lai Mohammed?

Oyegun: Lai Mohammed for that job is first class. That’s what I meant the last time I spoke on this.

PT: And so he is indispensable.

Oyegun: I didn’t say he’s indispensable. How can I say any human being is indispensable? These offices are zoned. Lai Mohammed is from the North Central and we have to look from that zone to replace him.

PT: What’s the issue surrounding the chairmanship of Board of Trustees of APC?

Oyegun: There is no issue with chairmanship of BoT or no chairmanship of BoT. It’s just that we have had a rethink that having a BoT of about 200 will mean another rally. We just need a group that is small in number but consists of very strong people that will be able to contribute to the policies of the party. We are already looking at legal aspect and redrafting the constitution to make the BoT a lot less in term of number but much in term of quality.

PT: There are reports that the disagreement between Atiku Abubakar and Bola Tinubu over who should be the chairman between the two is affecting the BoT?

Oyegun: No. You see, there are people with interests. Atiku has not said he wants the position and the same thing goes to any other person. But people who are behind the speculations are the persons involved. It is not Atiku. People are just creating scenarios. So, it has nothing to do with Atiku or Tinubu or whoever else might be interested or considered.

PT: It was reported that Tinubu was making moves to impose the BoT Chair.

Oyegun: I am not aware.

PT: People are saying the party is cash-strapped because the President does not fund the party. Is this true?

Oyegun: Please, gentlemen, understand what change is. We can’t continue to throw money. We can’t go into public treasury to take money for funding the party. That’s change. So, we have got to be innovative to find means of raising funds. Of course, we are constrained, but we have had to be inventive.  People are now saying somebody is not funding the party. That is normal. If tomorrow you hear the president is using public money to fund the party, won’t you scream? So, the change is even affecting the party.

PT: Is the party buoyant?

Oyegun: We are getting back. We are not buoyant in terms of throwing money around.