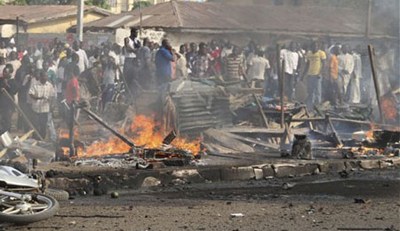 Five killed in another Boko Haram attack in Borno village

Three operatives of a local vigilante force helping soldiers in the fight against Boko Haram were on Tuesday killed by a bomb planted on the road by members of the Islamic insurgent group, an official said Wednesday.

Two civilians from Huyum village in Askira Uba Local of Borno state were also killed in an ensued shootout between surviving vigilante operatives and ambushing members of Boko Haram, the official said.

The spokesperson for the Vigilante Group in Borno state, Abbas Gava, told journalists on phone that his colleagues were in a patrol vehicle when they stepped on an explosive device in Huyum village.

“It was in the afternoon of Tuesday when our members in Askira Uba local government area were going on patrol, oblivious of the ambush attacked planned by Boko Haram, their vehicle stepped on a bomb buried in the middle of the road,” said Mr. Gava.

“As I’m talking to you now, our members have joined soldiers in hot pursuit of Boko Haram who were fleeing towards Sambisa Forest,” said Mr. Gava.