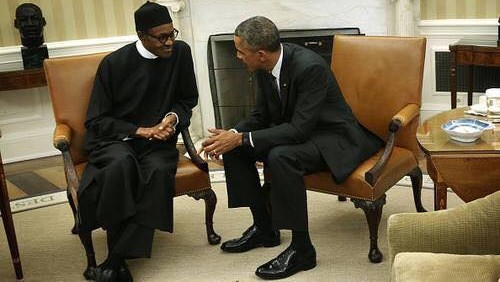 General Rodriguez’s claim challenges Nigeria’s official position on the seven-year old insurgency that has so far claimed about 20,000 lives and displaced 2.5 million people.

Mr. Rodriguez’s assertion comes almost two months after President Muhammadu Buhari told the Secretary-General of the United Nations, Mr. Ban Ki Moon, that the terrorist group was no longer “holding any territory as we speak”.

Mr. Buhari, who was speaking on the sidelines of the World Future Energy Summit in the UAE, said Nigerian Armed Forces in collaboration with the Multinational Joint Task Force (MNTJF) had driven the terrorist group from Nigerian territory into “fall-back positions”.

His comment about Boko Haram was in response to a question by Senator Angus King of Maine who asked about Al-Shabaab and Boko Haram more than ninety minutes into the testimony.

Mr. Angus’ direct question to General Rodriguez was: “Is Al-Shabaab and Boko Haram growing, are they adding members? I know they don’t hold territory, are they adding areas of influence?” to which Mr. Rodriguez replied, “actually sir, Boko Haram does hold some significant territory in Northern Nigeria as do Al-Shabaab in limited areas of Somalia”.

He added that recently there is a “tactical upswing” in Al-Shabaab’s operations in Somali but did not elaborate on Boko Haram’s operations, adding in his written testimony to the Senate Committee that containing and degrading the ISIL-affiliated Boko Haram remains one of AFRICOM’s top priority.

“We are watching carefully for signs that the threat posed by Boko Haram to U.S. persons is growing as a result of the group’s alignment with ISIL,” Mr.Rodriguez said.

He praised MNJTF allies and partners such as the African Union, France, the United Kingdom, the European Union, and the Department of State for engaging in the counter-Boko Haram effort.

“Our engagement now can assist our African partners in realizing their potential and gaining the capability to solve African problems,” Mr. Rodriguez said. “African solutions to African problems are, in the long run, in the best interest of Africans, Americans, and indeed the world.”

He appeared before the Senate committee with Generals Lloyd Austin of U.S. Central Command and Joseph Votel of U.S. Special Operations Command.

General Rodriguez’s testimony came couple weeks after the Subcommittee on Terrorism, Nonproliferation, and Trade at the United States Congress also convened hearings where two policy experts urged the US government to ramp up the push against Boko Haram.

Jennifer Cooke of the Centre for International and Strategic Studies (CSIS) and Alice Friend of the Centre for New American Security (CNAS), urged lawmakers to acknowledge and support real advances against Boko Haram that have degraded the group and weakened its leadership over the last 18 months.

“The one reason that today’s hearing is so important—it is important to remember that Boko Haram has proved resilient to setbacks in the past, the possibility that it will regroup and rebuild should be the source of critical regional and international concern,” said Dr. Cooke

“In the current global and regional context, where jihadist groups compete for notoriety and ISIL entrenches its presence in Libya, there is an urgent need to prevent Boko Haram from regenerating and possibly coming back more virulent, destructive, and globally connected than before.”

Ms. Friend reiterated that Boko Haram had bounced back from defeat before it re-surfaced in 2010 after the ambush that left its founder, Mohammed Yusuf, dead.

“The group seemed to be in full retreat, and was inactive for almost a year until Yusuf’s second-in-command, Abubakar bin Mohammad Shekau, released a video and a manifesto announcing his leadership of Boko Haram and threatening revenge on the Nigerian state as well as its Western backers.”

The current offensive against Boko Haram, led by the Nigerian military in partnership with Chad, Cameroon, and Niger under the Multinational National Joint Task Force (MNTJF), has “routed the group from territories it controlled and significantly degraded its capabilities and leadership,” said Dr. Cooke.

“Many thousands of Boko Haram members, along with a number of its senior leaders, have been killed or captured, and the group no longer appears to have access to the kinds of transport and equipment—tanks, armored vehicles, Toyota Hilux trucks—that it has had in the past”.

Nigerian Air Force has been engaged in a sustained assault, including recent drone strikes on Boko Haram enclave in Sambisa Forest, taking out fuel pumps, solar panels, and weapons caches as regional military forces have rescued thousands of women and girls who had been kidnapped by Boko Haram members.

“The group’s media operation—which reportedly received technical assistance from ISIL—has gone largely quiet, and there have been no video appearances by erstwhile leader, Abubakar Shekau (or by any of his alleged impostors) since early 2015,” Ms. Cooke said.

Even recent attacks that earned the group the dubious honour of being labelled the world’s deadliest terror group show signs of Boko Haram’s degraded status, according to experts.

In lieu of territorial control, the group is now reduced to terrorizing “public spaces that are notoriously difficult to secure, such as markets and transit depots” in attacks that feature coordinated bombings and “increasingly rely on kidnapped women and girls,” said Ms. Friend.

“Their use of kidnapped women to execute suicide attacks, while tactically advantageous (providing greater access even to secured areas), also suggests a shrunken supply of adult male foot soldiers”.

While the experts agree that this “hit-and-run” tactic shows that Boko Haram’s strength was never as an organized fighting force, but “a fractured, ruthless organization, willing to inflict maximum damage on the softest of targets,” they also see the urgent need for the United States and international community to step up strategic initiatives to contain the terror group indefinitely.

In addition to the U.S. inter agency advisory team sent to Abuja in 2014 and the recent deployment of 300 Defence Department forces to support intelligence, surveillance, and reconnaissance operations in Cameroon, Ms. Friend believes Nigeria could still benefit from U.S. security assistance programmes, including the new Security Governance Initiative, the Global Security Contingency Fund, and the Counter-terrorism Partnership Fund.

“Through these programs the U.S. has recently provided communications gear and equipment to Nigeria, including a recent delivery of 24 mine-resistant, ambush protected vehicles (MRAPs)”.

Dr. Cooke thinks the United States can offer more support in form of diplomatic pressure on the Chad Basin countries to maintain regional cooperation against Boko Haram, use of U.S. Treasury Department’s Terrorist Financing Tracking Programme to disrupt Boko Haram’s financial lifelines, assistance with collection and communication of intelligence on a real time basis, but above all, lawmakers must “think beyond Boko Haram”.

“U.S. policymakers must consider Boko Haram in a broader global and regional context. The Sahel region, including the Lake Chad Basin, risks becoming a proxy battleground for larger ideological and geopolitical rivalries. Competition between ISIL and al Qaeda, Shiites and Sunnis—even between Iran and Saudi Arabia—could fuel increasingly deadly competition among Islamist extremist groups of the region if the terror group is allowed to re-gain ground from its present setbacks.”