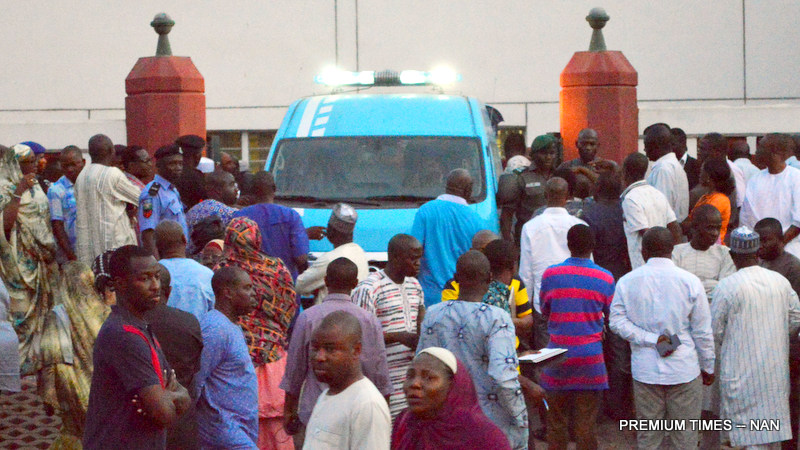 AN AMBULANCE CONVEYING INTO THE MORTUARY OF THE NATIONAL HOSPITAL, ABUJA, REMAINS OF THE MINISTER OF STATE FOR LABOUR AND PRODUCTIVITY, MR JAMES OCHOLI, WHO DIED OF AUTO-CRASH ON THE ABUJA-KADUNA HIGHWAY, ON SUNDAY (6/3/16). 2109/6/3/16/BJO/NAN

How Minister of State for Labour, James Ocholi, died — FRSC

The Federal Road Safety Corps, FRSC, said on Sunday that the remains of the late Minister of State for Labour, James Ocholi, have been deposited at the morgue of the National Hospital, Abuja.

Bisi Kazeem, the spokesperson of FRSC, confirmed to the News Agency of Nigeria in Abuja that the corpse of the minister was taken to the hospital along with two other casualties.

Mr. Kazeem explained that the deceased lost their lives in a crash that occurred at Kilometre 57, along Kaduna-Abuja highway on Sunday.

“The minister and two other occupants died eventually, while four people were injured,” he said.

Although Mr. Kazeem did not give details of the other victims of the crash, PREMIUM TIMES learnt that the other two deceased her the minister’s wife and son.

“It is with great sadness that the Kaduna State Ministry of Health and Human Services further announces the death of Mrs. Ocholi at Doka Hospital, who was in coma since the accident near Rijana, along the Kaduna-Abuja Road. Earlier, the death of Minister Ocholi and his son were announced. May their souls rest in perfect peace, Amen,” the governor wrote.

He became Senior Advocate of Nigeria in 2007.

He was also the Chairman, Disciplinary Committee of the Abuja chapter of the Nigeria Bar Association.

In 2011, he was governorship aspirant in Kogi State on the platform of the defunct Congress for Progressive Change.

Between 2013 and 2014, he was deputy national legal adviser of the All Progressives Congress, APC.

Last year, he sought the APC gubernatorial ticket at the party’s primary election, losing to the late Abubakar Audu. He was appointed minister in 2015.

Ese’s abduction: Until Nigeria makes example of Senator Yerima, there will be thousands of Yunusa – Soyinka