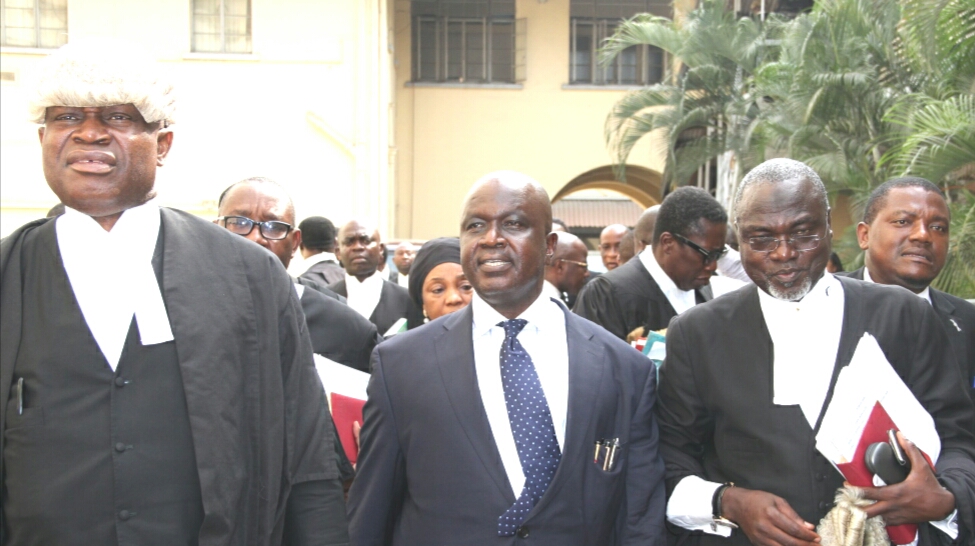 The Economic and Financial Crimes Commission, EFCC, on Tuesday arraigned a senior lawyer, Rickey Tarfa, before Justice Aishat Opesanwo of Lagos State High Court, Igbosere, on 2-count charge of obstruction of justice and attempting to pervert the course of justice.

Mr. Tarfa pleaded not guilty to both counts.

Based on his plea, the prosecution counsel, Rotimi Oyedepo prayed the court for a trial date and to remand the defendant in custody.

However, Adeniyi Akintola, a Senior Advocate of Nigeria, SAN, who led a team of over 90 Senior Advocates and other lawyers to represent Mr. Tarfa, said they had filed an application for bail which he said was served on the prosecution on the 10th of February, 2016.

In his application for bail, the defence counsel told the court that the defendant went to court voluntarily and that he was granted administrative bail by EFCC on self-recognition.

Justice Opesanwo, in her ruling, granted bail to Mr. Tarfa on self-recognition but ordered that he must not travel out of the country without the permission of the court.

The trial judge bemoaned the number of counsel who were in court for the defendant. She noted that there was no need for such magnitude of support as it amounts to harassment and intimidation of the court.

Soon after the ruling, Mr. Akintola told the court that he had filed an application to quash the charge.

Mr. Rotimi responded that he had not been served. He was subsequently served by the defence counsel in open court.

Justice Opesanwo adjourned the matter to March 14, for hearing of the application to quash the charge while the substantive case was fixed for April 20, 2016 for trial.

Mr. Ricky Tarfa, SAN, is accused of willfully obstructing two officers of the EFCC, Moses Awolusi and Sanusi Mohammed from arresting Gnanhooue Sourou and Nazaire Odeste, who were suspected to have committed economic and financial crimes in contravention of Section 38(2) (a) of the EFCC Establishment Act of 2004.

Also, he is alleged to have engaged in improper communication with Justice M. Yunusa of the Federal High Court Lagos between May 11 and June 25, 2015 while the case between the EFCC and two others was pending before the judge.

Count 1:
“That You Rickey Tarfa (SAN) on or about the 5th day of February, 2016 in Lagos within the jurisdiction of this honourable court, wilfully obstructed Moses Awolusi and Sanusi Mohammed, authorized officer of Economic and Financial Crime Commission from arresting GNANHOUE SOUROU and NAZAIRE ODESTE who were reasonably suspected to have committed economic and financial crimes by keeping the said suspects in your car between 11.00 hours to 16: 30 hours”

Count 2:
“RICKEY TARFA (SAN) between 11th of May and 25th of June, 2015 in Lagos, within the jurisdiction of this honourable court attempted to pervert the course of justice by communicating with Hon. Justice M.N. Yunusa of the Federal High Court through your mobile Telephone No. 08034600000 whilst suit No: FHC/L/CS/715/2015 between Rana Prestige Industries Nigeria and EFCC and Suit No: FHC/L/CS/716 between Hair Prestige Manufacturing Nigeria and EFCC filed by you on behalf of the applicants in the two suits seeking to retrain the commission from performing its statutory duties were pending before the said judge”.