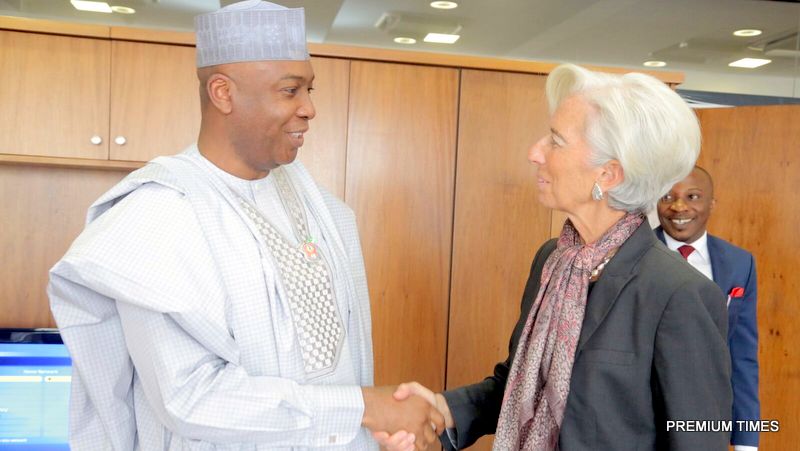 The Managing Director of the International Monetary Fund, Christine Lagarde, has said that the Nigerian government’s decision to restrict foreign exchange, a move that has affected millions of citizens, should only be a temporary economic step.

Ms. Lagarde, who is in Nigeria on a four-day working visit, said this when she met members of the Nigerian Senate on Wednesday in Abuja.

“Additional exchange rate flexibility — both up or down — can help soften the impact of external shocks, make output and employment less volatile, and help build external reserves,” she advised. “It can also help avoid the need for costly foreign exchange restrictions – which should, in any case, remain temporary.”

The Nigerian government has imposed restriction on foreign exchange access, blocking the use of Naira credit and debit cards abroad, and for online transactions requiring payment in foreign currencies.

She said the benefits of fuel subsidy in Nigeria are hugely skewed in favour of the rich at the expense of the poor.

“The subsidies that are still in place for kerosene and diesel should be targeted at those that need it most,” Ms. Lagarde said.

“However, research shows that over 70 per cent of subsidies often benefit the rich, while less than seven per cent benefit the poor.

“Nigeria needs to take hard decisions on debt, expenditure, revenue. Nigeria’s oil revenue should be spent on her people. Moving forward, Nigeria should show resilience to grow her economy,” she added.

Ms. Lagarde said while “Nigeria’s economic diversification is remarkable”, the country’s 2016 economic outlook “is not high”.

She said Nigeria must show resolve in the fight against corruption.

“There will probably be financial volatility going forward but IMF is ready to offer technical and other forms of assistance to Nigeria at Federal and State levels,” she said.

Emphasizing the importance of the Nigerian economy to Africa, she said, “Nigeria has a massive footprint in the region. Whatever happens in Nigeria will affect her neighbours”.

Earlier, in his opening remarks, the Senate President, Bukola Saraki, said President Muhammadu Buhari and the eighth National Assembly was up to the task of moving the country’s economy forward.

“Nigeria is undergoing trying times with falling oil prices, however, our nation is resilient despite challenges,” Mr. Saraki said.

Earlier, Ms. Lagarde held a meeting lasting over two hours with Central Bank Governor, Godwin Emefiele, as well as top officials of the bank and Managing Directors of commercial banks at the headquarters of CBN.

Addressing journalists at the end of the meeting, she said the meeting focused on issues affecting the Nigerian financial sector.

She said commercial banks, as the drivers of the economy, must channel funds to support the real sector of the economy on concessionary terms.