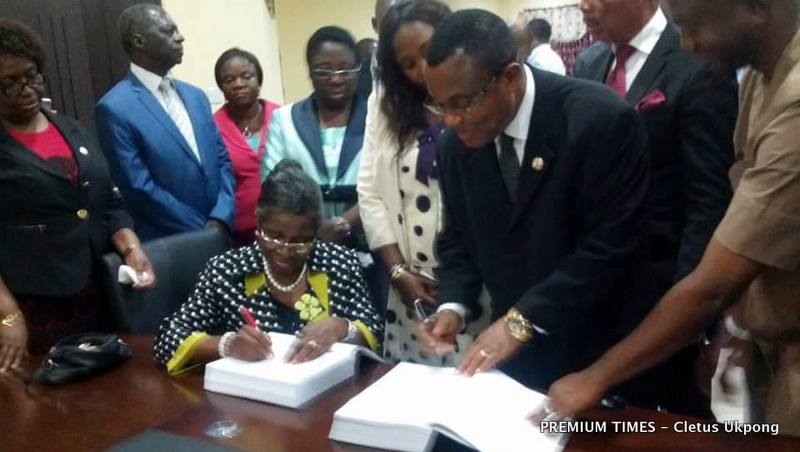 Prof. Enefiok Essien on Monday assumed office as the fifth vice chancellor of the University of Uyo, Akwa Ibom State, despite his indictment for sexual assault and forgery by the Court of Appeal.

PREMIUM TIMES had on November 8, 2015 exclusively reported the indictment of Mr. Essien in 2005 by the Court of Appeal, Calabar, for sexual assault on a female law student, Linda Onyebuchi Essell.

Amidst the controversy and tension generated by his appointment, the immediate past vice chancellor of the university, Prof. Comfort Ekpo, wrote to the Minister of Education, Adamu Adamu, suggesting that Mr. Essien’s inauguration be suspended because of his ‘fractured integrity’.

“I most respectfully submit that the inauguration of the new vice chancellor slated for December 1, 2015 temporarily be suspended to provide a window for any reasonable grievances to be looked into by your ministry and council as may be deemed appropriate,” Mrs. Ekpo said in her November 17, 2015 letter to the education minister.

Those who witnessed the handover ceremony told PREMIUM TIMES the process was hitch-free.

The handover ceremony started early Monday with both Mr. Essien and Mrs. Ekpo worshipped together at a campus church, Victory Chapel, as early as 8a.m.

They then headed to the office of the vice chancellor where Mrs. Ekpo’s official portrait in the office was replaced with that of Mr. Essien.

The handover notes were signed, and then Mr. Essien and Mrs. Ekpo made brief remarks.

The new vice chancellor didn’t say anything about his indictment by the Court of Appeal. He promised that his administration would do its best for the university.

There was a session of group photographs, and then Mrs. Ekpo showed Mr. Essien around his new office.

The Church of Christ, where Mr. Essien worships, conducted prayers inside the vice chancellor’s office.

The ceremony was witnessed by some members of the university’s Governing Council and some union leaders in the school.

At the end, Mrs. Ekpo was escorted in a motorcade to the faculty of education where she was a lecturer before her appointment as vice chancellor in 2010.

The new vice chancellor, Mr. Essien, was a senior lecturer in the university faculty of law when the reported sexual assault took place in 1995, while the victim, Ms Essell, was doing her second year in law

Ms. Essell, expelled from Uniuyo in 1997 for examination malpractice, had accused Mr. Essien of manipulating the university system against her because she refused to accede to his love overtures.

It was Mr. Essien, who invigilated Ms. Essell in the examination. It was him who accused her of examination malpractice. It was also him who chaired the Examination Malpractice Panel that tried Ms. Essell and also recommended her expulsion from the university.

“Sometimes in April, 1995 around 1pm, Essien, after our lectures on Contract of which he was the lecturer, summoned me to his office. He told me that I had the last opportunity to redeem my career which was billed for a doom by expulsion if only I could accede to his simple love overtures which will take nothing from me,” Ms. Essell said in her affidavit before the Federal High Court, Calabar, which nullified her expulsion.

Mr. Essien was also accused of forging the signature of one of the panel members as well as doctoring the panel’s proceedings.

The university had appealed against the judgment.

But the Court of Appeal, Calabar, in affirming the judgment of the lower court went on to say that Ms. Essell’s statements as contained in her affidavit were “serious indictment on Essien”.

Since there was no counter-affidavit by Mr. Essien, the court in its unanimous decision, held that Ms. Essell’s allegations “not having been challenged, contradicted and controverted, must be deemed to be true and correct”.

Mr. Essien was appointed vice chancellor by the Governing Council of the University of Uyo.

He was picked from among 10 other professors who contested for the position.

The Chairman of the Governing Council, Prof. Kimse Okoko, told PREMIUM TIMES that his Coucil received a petition against Mr. Essien after the Council had concluded the process of appointing him.