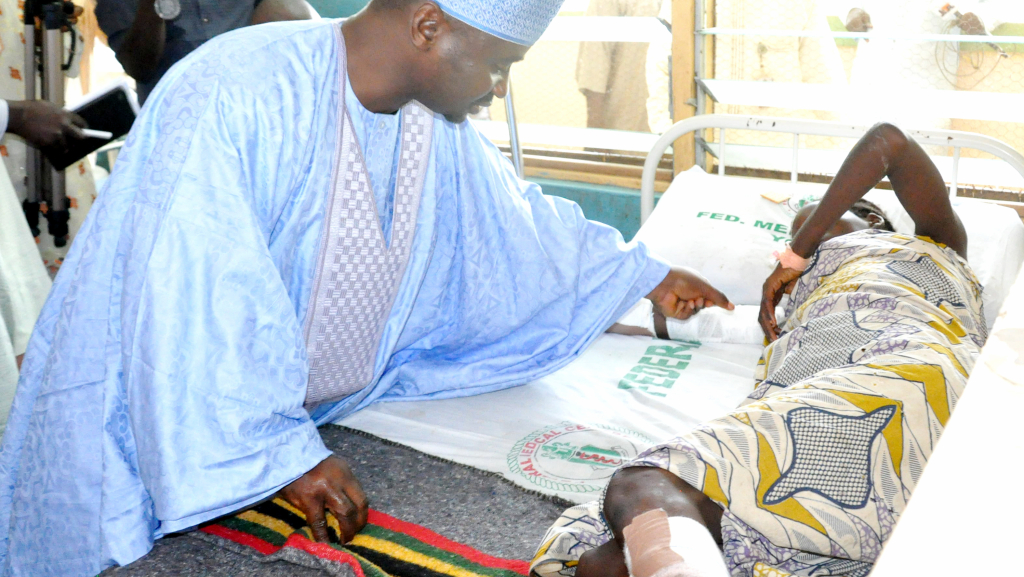 The National Emergency Management Agency has released the casualty figure in Friday’s bomb attack on a mosque in Yola, the Adamawa State capital.

A spokesperson for the agency, Sani Datti, said 27 persons were killed in the incident that occurred during Juma’at prayer.

Ninety-six others were injured and evacuated evacuated to the Federal Medical Centre, Yola and the Specialist Hospital Jimeta , Adamawa state, he said.

Read our earlier story on the incident below.

Many worshippers were on Friday killed in a bomb blast during the launch of a Friday mosque near old hajj camp in Jambutu in  Yola, the Adamawa state capital.

Witnesses say the blast, which occurred at about 1:40 p.m, minutes to  the commencement of Friday prayers, shook the town as it was heard across Yola and environs.

Witnesses say the bomb was detonated by a young suicide bomber in the vicinity of the mosque.

“A young man sneaked into the vicinity of the mosque immediately after the prayer commenced and detonated it leading to massive casualty,” a witness said.

Yusuf Osama, a member of the first aid group of Jama’atul Bid’a Wa Ikhamatus Sunnah, who was at the scene said the suicide bomber detonated his explosives minutes to  the Friday prayers.

“It is a gory scenario, many people were killed in the blast and we are busy evacuating dead bodies and injured victims to hospital.

“The suicide bomber wanted to get access to the main bowl of the mosque so that he will cause massive havoc but before he reached the building, the bomb detonated.

“The decapitated head of the suicide bomber was lying among the mangled bodies of the victims,” Mr. Osama noted.

Another witness, who declined to be named for security reasons, said a batch of soldiers drafted to the scene fired in the air to disperse the  crowd.

“When the first batch of soldiers came, they started beating people with horse whips which caused an uproar as the worshipers retaliated by pelting the soldiers with stones and the soldiers fired shots leading to the instant death of many people,” the source said.

The Police Public Relations Officer at the Adamawa State Police Command, Othman Abubakar, confirmed the incident but said, so far, the casualty figure had not been confirmed.

Victims in need of blood

In the meantime, dozens of victims were rushed to Yola Specialist Hospital and Federal Medical Centre as many were in dire need of blood transfusion.

‘’Several are now receiving treatments but many in critical condition, we are appealing for blood donors.

‘’For now, I can’t say the exact casualty figures of dead, our concern is to save life, and doctors are working assiduously to treat those with critical condition,’’ said Adamu Dodo, the public relations officer for the Federal Medical Centre.

The Yola attack occurred hours after a similar explosion occurred in a mosque in Maiduguri, the Borno state capital, killing and injuring many worshippers during the early morning prayer session.

That blast, according to residents, occurred in Jiddari Polo area at about 5am when Muslims were performing the first congregational prayer of the day.