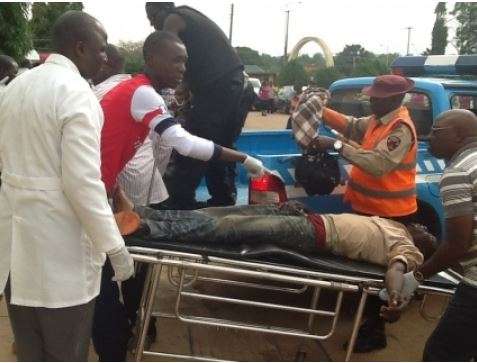 The terrorist  group had been effectively fenced away from the capital since it attacked a shopping plaza -Emab – in the Wuse 2 District of the city on June 24, 2014, killing  at least 21 and injuring 17 others, according to police.

But despite the huge fortification of the capital territory against attacks – through extensive roadblocks and security patrols – the terrorists sneaked in Friday, killing many.

In the first attack, the insurgents descended on Kuje, a town few kilometres from the city centre, blowing up a market and a police station.

An official of the National Emergency Management Agency, Ishaya Chonoko, said 13 people died in that attack, with 20 others injured.

But almost simultaneously, another bomb sounded in Nyanya, one of the most populated towns in Abuja, which had suffered similar attacks in the past.

He said the remaining 18 persons were receiving treatment at the Nyanya General Hospital.

No group has claimed responsibility for the attacks but security and rescue agencies believe the bombings have the imprimatur of the Boko Haram sect, which has launched similar attacks in the past.

The explosions were the first in Abuja since President Muhammadu Buhari took office in May, with a pledge to defeat Boko Haram.

The president gave the Nigerian military up to November to end the insurgency that has killed over 20000 people since 2009.