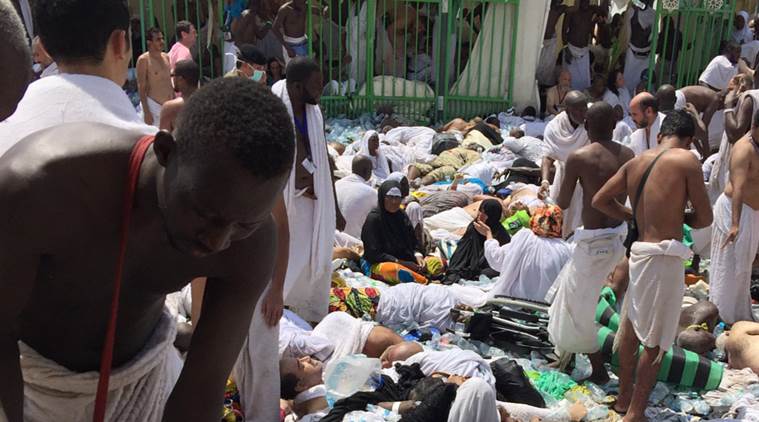 The Muslim Rights Concern, MURIC, has blamed Saudi Arabian authorities for the stampede in Muna on Thursday during Hajj activities.

At least 769 people were killed in the stampede during the devil stoning right performed by Muslims who travelled to Saudi Arabia for the Hajj. Over a dozen Nigerians have been confirmed dead from the stampede with many more yet to be accounted for.

In a statement on Saturday, MURIC whose officials were in Muna during the incident, said the failure of adequate planning for the event was “criminal negligence” and “the Saudi authorities must be held accountable.”

The group, in the statement by its director, Ishaq Akintola, urged “the Nigerian government to support NAHCON’s (Nigerian Hajj agency) stand on this.

“Nigeria must demand compensation from the Saudis for families of the bereaved. We should also task the Saudis to involve the world Muslim Ummah in the planning and implementation of the annual hajj exercise in view of the emerging scenario of complacency on the part of the Saudi authorities.”

Apart from Nigerian officials, Iran has also blamed Saudi authorities for the stampede during which about 130 Iranians were killed.

The stampede in Muna on the way to the stoning spots (jamaraat) which occurred on Salah day Thursday 24th September, 2015 claimed about 717 lives among whom about 30 are suspected to be Nigerians.

The Muslim Rights Concern (MURIC) is deeply saddened by the death of highly qualified Nigerians like Professor Tijani Elmiskin and Bilkisu Yusuf in the stampede. We are devastated and we are in a mourning mood with the bereaved families. In particular, we commiserate with President Muhammadu Buhari, Muhammad Abubakar III, the Sultan of Sokoto and President-General of the Supreme Council for Islamic Affairs as well as all Nigerian Muslims at this trying moment.

We remind all true believers that Allah allows tragedies in times like these in order to test their faith. “Or do you think Allah will not try you simply because you are believers? Remember that we tested those before you…” (Qur’an 19:1-3).

As part of the team which officiated during this year’s pilgrimage, we affirm that officials of the National Hajj Commission performed their duties as expected of them. The airlift from Nigeria to Saudi Arabia was hitch free and the two tragedies which occurred in Saudi this year can only be blamed on situations beyond NAHCON’s control. The current chairman of NAHCON, Abdullahi Mukhtar, was seen on several occasions getting personally involved in operations and keeping vigil at night to ensure a smooth hajj exercise. He stayed among the pilgrims and officials, rode in the same buses with them and shunned all offers for VIP treatment.

As eyewitnesses of the gory stampede incident, we testify that it was caused by security breakdown on the part of the Saudi authorities. We left Muzdalifah for Muna around 6 am on that fateful day. We branched in the NAHCON camp to drop our personal effects and headed straight to the jamaraat which were less than three kilometres away. To our surprise, the road was blocked by Egyptian pilgrims who had cast their own stones and were returning to their camp. Instead of taking the route designated for returning pilgrims, they stubbornly took the route meant for those who were going. The road became narrow and movement became difficult. The atmosphere became charged and even breathing and visibility were affected. The few policemen who were around desperately threw water at us to save us from collapsing. It became glaring to us at that moment that a monumental stampede was just around the corner.

The Saudi authorities therefore lied when they tried to put the blame squarely on African pilgrims. The stampede would not have occurred at all if Saudi security agents had disallowed pilgrims returning from the jamaraat from taking the same route on their way back. The practice over the years have always been to take a detour but this was not enforced on Thursday. The fact that the road to the same jamaraat became very free and safe yesterday and this morning when Saudi security agents strictly enforced the rules by disallowing returning pilgrims to use the same route as those going proves that our hypothesis is correct.

This is criminal negligence and the Saudi authorities must be held accountable. We urge the Nigerian government to support NAHCON’s stand on this. Nigeria must demand compensation from the Saudis for families of the bereaved. We should also task the Saudis to involve the world Muslim Ummah in the planning and implementation of the annual hajj exercise in view of the emerging scenario of complacency on the part of the Saudi authorities.

In conclusion, MURIC commends NAHCON for insisting that Nigeria should be part of any investigation of the tragedy. We laud the professionalism of the Nigerian officials in the team. We pray that Allah gives the bereaved families the fortitude to bear the losses.