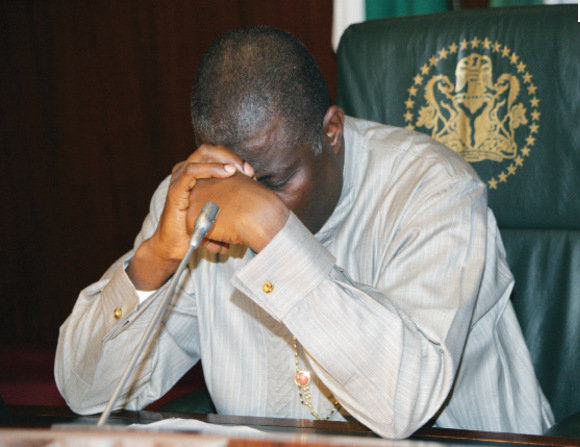 Former President Goodluck Jonathan authorised the withdrawal of a whopping N67.2 billion in cash money from the Central Bank of Nigeria between November 2014 and February 2015 for “special services,” PREMIUM TIMES can authoritatively report today.

The two cash withdrawals were made in the build up to the 2015 general elections.

Our sources said even more ‘curious’ large withdrawals were made from the bank during the period but we were unable to obtain documents to authenticate the claims.

But highly classified documents obtained by this newspaper, Friday, showed that at least N67.2 billion were withdrawn in cash from the banks in two tranches.

Insiders at the CBN said the huge cash were carted away in bullion vans.

One of the withdrawals was made through a memo which originated from the office of the former National Security Adviser, Sambo Dasuki, allegedly based on Mr. Jonathan’s instruction.

NAPIMS is in charge of the Federal Government’s investments in the petroleum industry.

The first memo, dated November 2014, contained a request for the withdrawal of $47 million cash out of N10 billion earmarked for release for an unbudgeted “special services”.

In the memo with reference number: NSA/366/S and titled: “Request for Funds for Special Services,” an official from Mr. Dasuki’s office had drawn the CBN governor’s attention to a previous discussion and requested the release of the said funds by the bank.

The balance from the N10 billion, the memo directed, was to be paid out in Euro, while a certain Director of Finance and Administration with the name S.A Salisu, was authorised to sign and receive the haul of U.S dollars and Euro in cash, on behalf of the NSA’s office.

“Mr. S. A. Salisu, director finance and administration is, hereby authorised to sign and collect the amount. Please accept, Your Excellency, the assurances of my highest esteem,” the memo said.

It remains unknown what the “special services”, for which the funds were removed, are.

Our sources claim they were spent on “electioneering-related” matters. But that could not be independently verified Saturday.

The second memo, raised by NAPIMS, and dated February 25, 2015 conveyed an instruction to the director, Banking and Payment System Department of the CBN to urgently pay in cash, the sum of $289,202,382 (N57.2 billion) to the National Intelligence Agency, NIA.

“Upon receipt of this mandate, please pay urgently the under-listed beneficiary the cash amount indicated,” the memo said.

The payment instruction in favour of the NIA was signed by one Okonkwo Godwin, General Manager, Finance, NAPIMS, with staff No. 18526, on February 25, 2015.

But sources from the CBN, who cannot be named because they were not authorised to speak on the issue said the funds were taken away at night with bullion vans under heavy security cover.

Mr. Mu’azu said he did not have authority to speak to the media about the status of the bank customers’ transaction details.

However, a senior official, who asked not to be named, as he had no permission to speak on the issue in his official capacity, said the bank has details of the transaction.

“My brother, the report is true,” he told PREMIUM TIMES. “Every detail is on point. But, since they claimed the withdrawal was for security services, anything could have been referred to as such. Nobody knows.”

Mr. Jonathan could not be reached for comments. One of his former spokespersons said he no longer speak for the former President. Another said he was busy and could not speak on the matter.

They all requested anonymity, saying they don’t want to be associated with issues they know nothing about.

The withdrawals of the huge cash is a violation of Nigeria’s Money Laundering (Prohibition) Act, 2011, which Mr. Jonathan personally assented to.

Section 16 (d) of the Acts says anyone who makes or accepts cash payments exceeding the amount authorized under this Act shall upon conviction be liable to a forfeiture of 25% of the excess above the limits placed in section 1 of the Act.