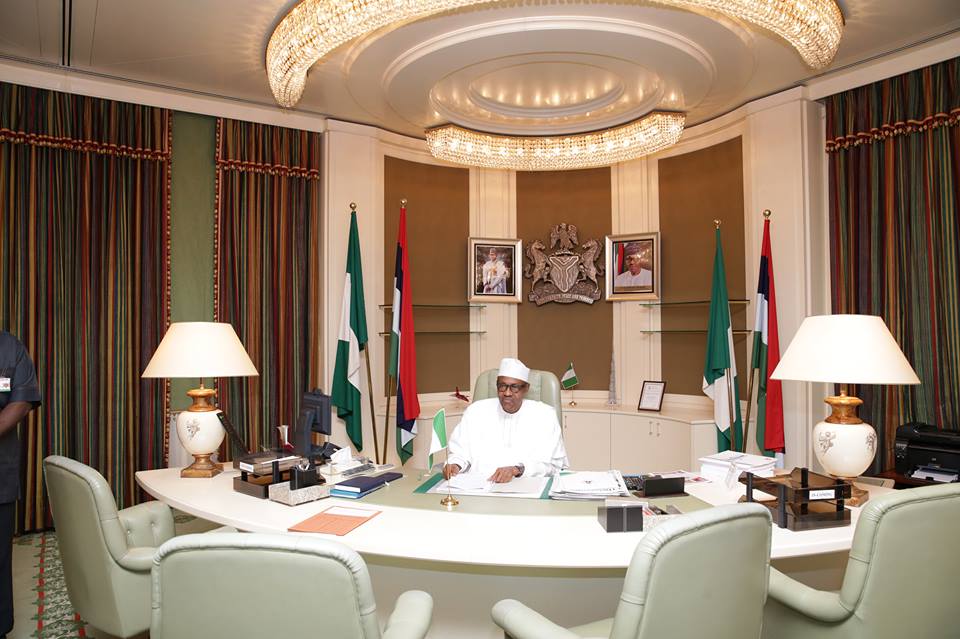 President Muhammadu Buhari on Day one at Presidential Villa

Nigeria’s politicians are never short on promises. After 16 years of rule by a party which oversaw rising corruption, growing poverty levels, and a failing war against Boko Haram insurgents, its population has grown used to them being broken.

Still, many Nigerians hope that those of their new president, Muhammadu Buhari, will prove stronger.

When he promised “change” ahead of March elections, Nigerians voted him in with a hefty majority, bringing about the first such democratic power transfer in the country’s history. So is Buhari delivering? Or as he approaches 100 days in power, due on September 5, is he “failing” already?

Page-upon-page of pledges before election

The 100-day marker has been used to gauge presidential effectiveness ever since it was pioneered by Franklin D. Roosevelt, who inherited the depression-stricken American economy in the 1930s. The idea is that governments can be at their most effective at their dawn, when their political capital is high, their leadership fresh, and their control of parliament strong. The work they do early on can serve as a model for the future.

In almost two decades of civilian rule, Nigeria has also taken to measuring its politicians on their early performance. Both before and since the election, the Nigerian media has reported widely on a series of promises they say were made by Buhari and his campaign team ahead of the poll.

The main source for this appears to be the president’s “Covenant with Nigerians”, which was distributed to the media before the vote and contains page-upon-page of pledges. In it, the president vows to “Publicly declare my assets and liabilities” and to “Ensure that… no force, external or internal, will occupy even an inch of Nigerian soil”. He also says he will “Unveil a health sector review policy”; “Address the gaps in power sector privatisation”; and “Ensure that all children of school age… are in school”.

But as September 5 approaches, a row has broken out over whether or not Buhari and his team made any commitment to achieve the promises within his first three and a bit months in office.

‘Too late to disown the promises’

Asked by Africa Check, Lai Mohammed, the ruling party’s national publicity secretary, said he was “not aware that [Buhari] promised to deliver anything in his first 100 days”.

The presidential spokesman Garba Shehu went further by saying he “did not fund or authorize” the pamphlet, which in fact makes no mention of achieving the president’s aims within 100 days. He also disowned a reported second document entitled “One Hundred Things Buhari Will do in 100 days”, which Africa Check could not source.

In response to such rebuttals, the Centre for Democracy and Development released an article on Monday arguing: “It is too late for President Buhari to disown the promises, on the basis of which Nigerians voted for him”.

In fact, as Oluseun Onigbinde, one of those behind the CDD’s promise-tracking Buhari Meter, noted, in a speech in the UK in February, then candidate Buhari had already dismissed talk of what should be done within 100 days.

Why Buhari’s campaign team did not correct the widespread reports of the 100 day claim at an earlier point is not yet clear.

Of course, meeting the full set of promises attributed to the president would be a tall order for the first 100 days of any government, let alone one shackled by the interests of an old political elite which doesn’t share the president’s distaste for dirty dealings.

During his first three months in office, Buhari has focused on launching a multinational force to fight Boko Haram insurgents in the north-east, and on repairing broken relationships with Western partners. He has begun reforms within the opaque state-owned oil company, cancelled unfavourable oil contracts, and started probing public officials, including the former national security adviser Sambo Dasuki.

But the president is yet to name a cabinet and has struggled to gain control of a rebellious national assembly. Jihadists continue to occupy some north-eastern territory and are staging bomb attacks on a weekly basis. Kids are still out of school and hospitals are a mess. Even on measures which he could have delivered alone – notably asset declaration – he has stalled.

Buhari’s popularity is still palpable, but his honeymoon period will soon be over. With his first 100 days behind him, if he struggles to deliver all that he’s promised them, the population may grow less patient. Allowing people to believe the 100-day promises had been made is not a good start.

Eleanor Whitehead is The Economist’s West Africa correspondent, and lives in Lagos.

This report was first published by our partner, Africa Check www.africacheck.org , a non-profit fact-checking organisation. Twitter account: @AfricaCheck. We have their permission to republish here.