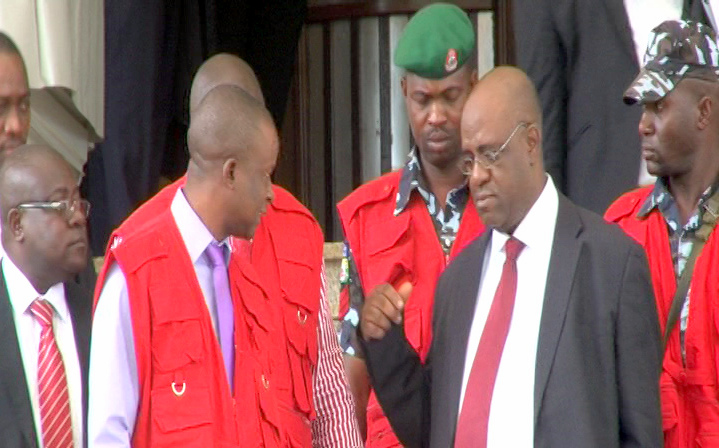 In what appears a crafty attempt to arm twist the office of the Attorney General of the Federation and force his release from prison custody, where he has been remanded on the orders of the Court of Appeal, embattled former managing director of the Nigerian Security Printing and Minting Company, Emmanuel Okoyomon, has approached Justice Valentine Ashi of the Federal Capital Territory High Court with an ex parte motion seeking his release from prison.

Mr. Okoyomon, in the supporting affidavit, is seeking among others, an order for his immediate release on the grounds that the over two months he has spent in prison custody were beyond the time contemplated by Justice E. S Chukwu of the Federal High Court, Abuja who first ordered his remand on May, 4 2015, after granting the extradition request brought against the applicant by the Attorney General of the Federation.

He also claims that his continued incarceration has adversely affected his health, and that the medical facilities at the Medium Security Prison, Kuje, were inadequate for his health needs.

Those familiar with the case consider the order of the FCT High Court as specious, and wonder why the applicant failed to disclose to the court that the Court of Appeal had refused his bail application, while ordering a stay of execution of the Federal High Court ruling on his extradition pending the determination of the applicant’s appeal at the appellate court.

They claim that it is deceitful of the applicant to claim that he is being detained illegally when he is on remand on the orders of the Court of Appeal.

“I think this is another classic case of abuse of court process and we will be watching closely the actions of Justice Ashi in this matter”, one of them said.

Justice Chukwu had on May 4 ordered the extradition of Mr. Okoyomon to the United Kingdom to face charges of corruption and money laundering.

Mr. Okoyomon’s extradition is sought by the UK government over his alleged complicity in the bribery scandal involving some Nigerian agencies, including the NSPMC and Securency Pty of Australia.

Dissatisfied by the May 4 ruling, Mr. Okoyomon, through his counsel, Alex Iziyon, SAN, approached the appellate court seeking a stay of execution of the ruling of the lower court.

The embattled MINT MD ran into trouble following the October 1, 2009 launch of the polymer bank notes in Nigeria, which saw the N5, N10, and N50 notes remade in polymer material as against the original paper version.

A scandal later broke that CBN and NSPM officials received bribes to effect the switch to polymer.

NEXT, the now rested Nigerian newspaper, had reported extensively how Securency Pty, a bank note printing company owned by the Reserve Bank of Australia (RBA), engaged in a series of bribery schemes to secure polymer note printing jobs.

According to the paper, as well as an Australian newspaper, The Age, at least N750 million was paid in bribes to some Nigerian officials between 2006 and 2008 to secure the contract which saw to the initial supply of about 1.9 billion pieces of polymer substrates on which bank notes were printed.

Subsequently, several international investigations over the activities of the bank note company led to the arrest, prosecution as well as sack of several top management staff of the RBA and its sister company, Securency Pty.

In its own investigation, Nigeria’s anti-corruption agency, the EFCC interrogated several officials of the CBN and NSPM.

But while no official of the Central Bank has so far been indicted, the commission has been in court with Mr. Okoyomon, over the request to extradite him to the United Kingdom to face prosecution over some findings related to the allegations.
The U.K. had sought the extradition of Mr. Okoyomon over his alleged role in the bribery scheme allegedly executed between 2006 and 2008.