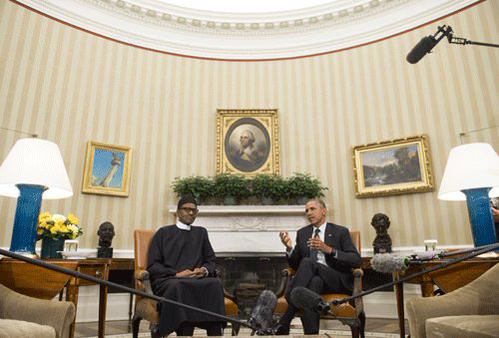 The Vice President of the United States, Joe Biden, has urged President Muhammadu Buhari to be assertive in tackling corruption in Nigeria and to appoint only “seasoned technocrats” to head key sectors of the economy.

Mr. Biden gave the advice Monday when he and Mr. Buhari met in Washington DC.

President Buhari is on a four-day official visit to the U.S. He also met President Barack Obama and other U.S. officials on Monday.

The president will hold further meetings between Tuesday and Wednesday when he rounds up his trip.

At a breakfast meeting at the Naval Observatory, the official residence of the U.S. Vice President, Mr. Biden shared with President Buhari what the U.S. has learnt from the terror war, saying that “victory cannot come from military option alone”.

He said military option must be combined with strong socio-economic support programmes, promising that the U.S. would work with Nigeria in that direction.

Mr. Biden assured of the goodwill of the U.S. in rebuilding the Nigerian economy, but observed that corruption and weak institutions must be tackled, if Nigeria was to benefit from reforms.

He stressed that seasoned technocrats must manage key sectors of the Nigerian economy, and only then would investors be attracted to the country.

Mr. Buhari had said Monday in an article that he will not appoint ministers till September, four months after taking office.

Mr. Biden congratulated Mr. Buhari on his victory at the March 2015 elections, adding that it was obvious that the president enjoyed the confidence of the Nigerian people.

In his remarks, President Buhari thanked the U.S. for standing by Nigeria in the run up to general elections early this year, noting that the visit of the Secretary of State, John Kerry, was critical as it sent home the message that America would not brook the subversion of the people’s will.

On oil theft, the President estimated losses at between 10 and 20 billion dollars, stressing that such income could have been deployed with salutary impact on various spheres of national life such as education and healthcare, among others.