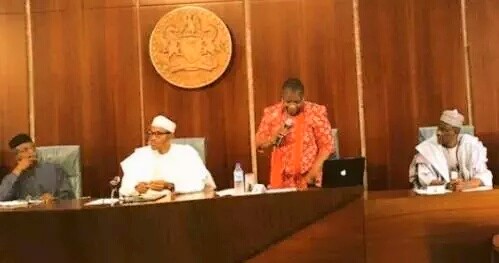 Oby Ezekwesili, leader of the #BringBackOurGirls group addressing the presidency during a protest to Aso Rock.

The BringBackOurGirls (BBOG), a campaign group for the return of the over 200 school girls abducted by Boko Haram from Chibok, has requested President Muhammadu Buhari to visit Chibok community within the first 100 days of his administration.

The group said the visit will give the president a first-hand impression of the plight of the families who lost their children a year ago.

The failure of then President Goodluck Jonathan to visit the community, and his handling of the Boko Haram crisis, drew wide condemnation.

The former president also refused to meet with the BringBackOurGirls group.

The group, led by a former education minister, Oby Ezekwesili, met President Buhari on Wednesday, the first such visit.

“The entire Chibok community anxiously requests that Mr. President visit Chibok within the first 100 days of this administration to have a first-hand view of the plight of our people, while we look forward to the safe return of our daughters very soon,” said Dauda Illiya, who spoke on behalf of Kibaku Area Development Association, an association of indigenes of Chibok community.

Members of the association were part of the BringBackOurGirls, BBOG, delegation to the presidential villa.

The BBOG group put forward a wish list requesting that amongst other things, the Federal Government should spare no resources in urgently rescuing the 219 Chibok Girls as promised by the President and the National Security Adviser of the President at various times.

The group said there should a feedback mechanism so the affected parents and the public can have regular updates on efforts to rescue the 219 ChibokGirls.

In his remarks, Mr. Buhari decried how the Chibok abduction was handled by the Jonathan government.

He said the conflicting report between the security agencies and the federal government had put the country in bad light locally and internationally.

“The delayed and late reaction by former government and its agencies was very unfortunate” he said.

He however assured his government will do its best to restore the respectability of the country and its institutions adding that strategies, which cannot be made public at the time, have been put in place, to defeat the Boko Haram scourge.

The president said he was pleased that the Boko Haram terrorists were blowing up themselves in the process of their attacks and should “change their names from Boko Haram to something else because no religion will kill the innocents. You can’t go and kill innocent people and say Allah Akbar! It’s either you don’t believe it or you don’t know what you are saying.

“So it has nothing to do with religion, they are just terrorist and Nigeria will demobilise all of them,” he said.

What we are doing to end Boko Haram insurgency — Buhari