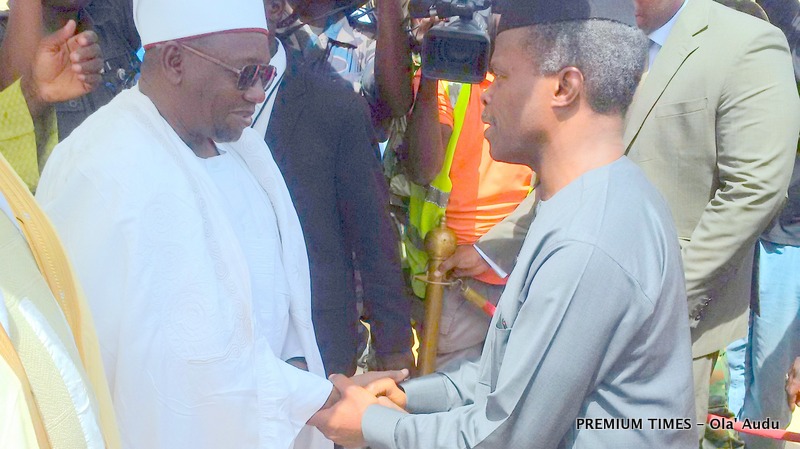 Two suicide bombers, male and female, today blew themselves up outside a village in Maiduguri, capital of Borno state, at the time the vice president of Nigeria, Yemi Osinbanjo, was visiting the city, witnesses and security sources said.

VP Osibanjo arrived Maiduguri at about 10:45 am.

He was in to assess the security situation in the state capital, to visit the Internally Displaced Persons camps, before proceeding to Yola, another northeast Nigerian city plagued by Boko Haram insurgency, on a similar‎ mission.

The two suicide ‎bombers blew themselves up in Mulai barely an hour after the VP arrived the city and was going about his assignment.

Mulai is located on the Southwest flank of Maiduguri, while Dalori IDP camp is located about 30km at the southeast axis of the city.

Witnesses said the first bomber, a female, suspected to be in her teens, had explosives planted around her body, concealed with her garment.

She was seen near the main gate of Mulai General Hospital, 10 kilometers southwest of Maiduguri.

Samaila Babayo, a witness, told journalists, “I saw the woman while she was trying to find her way into the hospital. She covered herself with a Hijab and wanted to enter the hospital but was forced to stop while approaching the facility.

“I strongly suspect that the explosives in her body were remotely controlled because while guards at the gate of the hospital were shouting at her, we heard a loud bang and that was all, she was completely torn to shreds by her own explosive,” he said.

Al‎most immediately, the second bomber, who was riding a bicycle arrived a spot near the perimeter fencing of the hospital and immediately detonated the explosive on him.

One of the security operatives at the hospital said, “The two bombers wanted to enter the hospital, one was a lady and the other a man of about 20 years who rode on bicycle through the back of the hospital.

“But when the gate guards denied them entry, the explosions in their bodies detonated and killed them,” he said.

Witnesses said no one was injured in the two blasts because they were sent back by the security guards.

Mato Abdulmuminu, a trader who has a stall across the road opposite the hospital, said “from the way the lady was advancing towards the hospital, it was immediately suspected that the lady had a sinister motive. The people began to shout at her so she began to turn back and then the bomb went off. The second bomb blew almost immediately”.