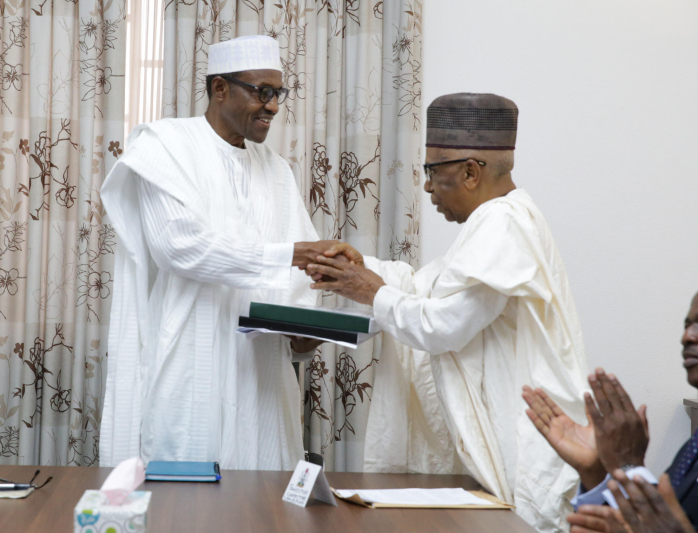 The Ahmed Joda transition committee has urged President Muhammadu Buhari to immediately terminate all dubious appointments made by former President Goodluck Jonathan in the last nine months, and review all contracts awarded by the administration in the last 18 months.

The committee said this is to help the new government sidestep ineptitude and waste, and scale up its revenue base.

The recommendations are part of a portfolio of swift steps Mr. Buhari must take within three months of assumption of power if he must save cost and “enhance liquidity”, the committee said in its 800-page report to the president.

PREMIUM TIMES exclusively obtained volumes of the report, which contain extensive analyses of Nigeria’s key challenges, with suggested responses for the economy and finance, governance and social welfare.

The report details a list of prompt, medium and long term decisions Mr. Buhari must take, or authorise, within 30, 45, 60 and 90 days of taking office, to create immediate impact, reduce government liability, increase revenue and stabilise the polity.

For instance, to deal with crippling fuel crisis, and backlog of unpaid salaries by states and the federal government, the committee advised Mr. Buhari to “borrow immediately or use CBN (Central Bank) advances” for salaries and fuel subsidies to “avoid chaos”.

For contracts, it urged the administration to “review all contracts signed in the last 18 months by FGN”.

That move will “save expenditure on non-strategic projects, and can free up cash flows for other vital initiatives”, the committee said.

The decision on contract is to be taken within 90 days from May 29, and should be handled by the Federal Executive Council and the Bureau of Public Procurement, BPP.

At a time Mr. Buhari is facing growing criticism over his delay in making key appointments, and his  failure to lay out initiatives to assure a burdened nation of immediate relief, the Joda report provides a fresh perspective on preparations by the new government and the ruling All Progressives Congress, APC, to confront some of Nigeria’s monstrous problems.

The committee said the president should review all appointments made by Mr. Jonathan in the last nine months, and “for strategic agencies requiring professional leadership, the government should terminate all appointments not based on merit”.

The Joda panel said such move will save costs associated with poor decision making by an incompetent management team, and must be delivered within 45 days of the new government.

That recommendation appears to take into consideration the last minute appointments by Mr. Jonathan after he lost the March 28 elections.

In less than two months, Mr. Jonathan, not previously given to readily hiring and firing, sacked dozens of top officials and replaced them before leaving office.

As further measures to check waste and increase efficiency and accountability, the committee urged the government to quickly implement a single bank account, to be called Treasury Single Account, and to commence full implementation of the Fiscal Responsibility Act within 60 days, and chase up any outstanding funds from all government offices.

This will curtail the “excesses carried forward from previous administration”, it noted.

The two facilities were used by the past government to check thousands of “ghost workers” who drew billions of naira in salaries that ended in the pocket of fraudulent officials.

Despite its claim of saving more than N100 billion from “ghost workers”, the Jonathan administration failed to punish those behind the scam.

Claims by former Finance Minister, Ngozi Okonjo-Iweala, that the case had been transferred to the Independent Corrupt Practices and other Related Offences Commission (ICPC) alongside names of indicted officials, were repeatedly refuted by the anti-graft body.

But more than other proposals in that unit of the report, the committee paid greater attention to government contracts and urged President Buhari to be decisive in reviewing the deals.

The committee said the handover notes from the Jonathan administration showed aggregate contractor liabilities of N4 trillion as at April 2015.

Of that amount, the Ministry of Education owed the most at N1.2 trillion, followed by the  finance ministry which has N467.7 billion.

The committee warned Mr. Buhari that it would be irrational to rely on the purported huge balances the former government claimed it left behind.

First, it said, the numbers lacked key information to establish the authenticity of the contracts.

It made the following  observation regarding the claims by the former government regarding outstanding liabilities:

– The aging of these liabilities was not provided.

– A detailed list of contracts was not provided and therefore, some balances maybe double counted (eg contracts funded through debt maybe captured in both MoF and the contracting Ministry).

– Some balances may be disputed. Therefore, liabilities may change once settlement/judgement is reached.

– No documentation was provided to confirm if the projects were executed to the agreed specifications.

– Some contracts maybe cancelled or terminated”.

As a first step, the Joda-committee advised Mr. Buhari to establish an Inter-Ministerial Task-Force to review all outstanding contracts (and associated liabilities) across all Ministries, Departments and Agencies within three months.

“The mandate of this Task-Force is to confirm the existence of the liability and authenticate the accuracy of information provided in the handover notes,” it said.

“The Government should only recognise the liabilities verified and confirmed by this Task-Force.”