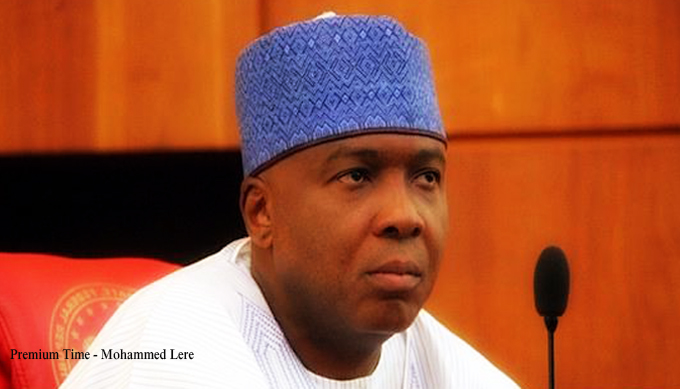 The Senate President, Bukola Saraki, has written the leadership of the All Progressives Congress, explaining that his “hands were tied” hence he could not accede to the request to appoint the party’s choices for the principal positions in the Senate.

In a letter dated June 25 and addressed to the APC National Chairman, John Odigie-Oyegun, the senate president said extant laws and parliamentary procedure blocked him from appointing the party’s nominees for the positions.

The Senate on Thursday instead named Ali Ndume as Senate Leader, Bala Na’Allah as Deputy Senate Leader and Felix Aimikhena as Chief Whip.

The new principal officers were nominated by their respective zones for the positions.

Mr. Saraki explained to the APC that he could not act on the party’s directive because another caucus of the party in the upper legislative chamber had met and selected their choices for the positions.

He said though he would have loved to toe the party’s line his hands were tied in the circumstances.

“The said letter was received after various APC zonal caucuses had taken the decisions to nominate candidates as principal officers of the Senate in line with parliamentary conventions and the extant provisions of the Senate Standing Orders 2015 as amended (Chapter V1, Rules 28, 29, & 31 refers). This was followed up to the prior APC Senate Caucus meeting held on 23rd June, 2015.” Mr. Saraki said.

“Accordingly, the letters transmitting the decison of the APC Senate Caucuses do not conform to the recommendations as contained in your letter under reference. (Please see annextures 1,2 and 3 attached herewith.)

“Furthermore, while one is strongly persuaded to toe the party line and act in accordance with the suggested party position, regrettably, clear provisions of our extant rules and standard parliamentary convention have not given one that leeway to act otherwise.

“Therefore, my hands are tied in the circumstances and I seek your understanding.”

Here is the letter below: 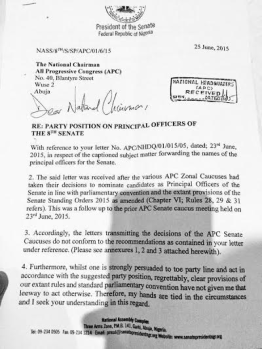 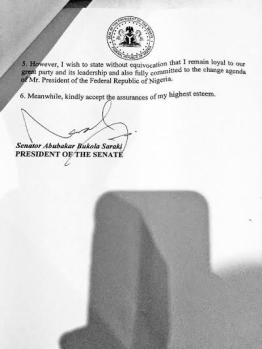 11 students, others killed in car crash in Ogun