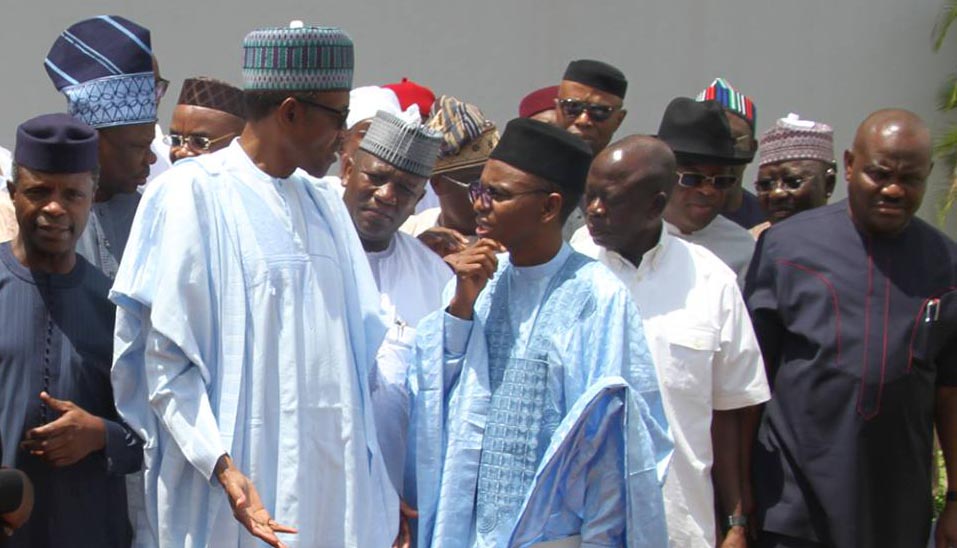 Buhari talks tough, vows to recover billions of dollars stolen by past officials

President Muhammadu Buhari Tuesday in Abuja assured state governors that the days of impunity, lack of accountability, and fiscal recklessness in the management of national resources are over in Nigeria.

Speaking at a meeting with the governors in the Presidential Villa, Mr. Buhari also vowed that funds stolen by government officials who abused their offices in the recent past will be recovered and systemic leakages stopped.

“There are financial and administrative instructions in every government parastatal and agency. But all these were thrown to the dogs in the past,” the Special Adviser to the Media and Publicity, Femi Adesina, quoted the President as saying. “Honestly, our problems are great, but we will do our best to surmount them.

“The next three months may be hard, but billions of dollars can be recovered, and we will do our best, ” the President told the governors.”

Expressing surprise that the governors had tolerated the atrocities allegedly committed with the Excess Crude Account since 2011, President Buhari promised to tackle the issue decisively.

The President declared that the payment of national revenue into any account other than the Federation Account was an abuse of the constitution, adding that what he had heard was going on in many agencies and corporations, particularly the NNPC, was clearly illegal.

On the refund of monies spent on federal projects by state governments, President Buhari assured the governors that the Federal Government will pay, but insisted that due process must be followed.

He also said that a comprehensive statement on the economic and financial situation inherited by his administration will be made to the nation within the next four weeks.

“We will try and put the system back into the right position. What happened in the 2nd Republic has apparently happened again, and even worse, but we will restore sanity to the system,” President Buhari assured the Governors.

On an immediate lifeline for states that owe salaries running into many months, President Buhari said a committee headed by the Vice President Yemi Osinbajo will look at the Excess Crude Account and see what can be shared immediately.

The governors, led by Chairman of the Governors Forum, Abdulaziz Yari of Zamfara State, had presented a wish list to the President that included:

1) Obedience of extant Supreme Court ruling that all monies go into the Consolidated Federation Account;

2) An order from the President that all revenue generating agencies must pay into the Consolidated Federation Account;

3) Review of the Revenue Allocation Formula;

4) Refund of the monies expended by states on federal projects;

5) A special consideration for the three states of the North East under Boko Haram infestation;

6) Full details of the amounts that accrued into the Excess Crude Account from 2011, and how the money miraculously shrank without official sharing.