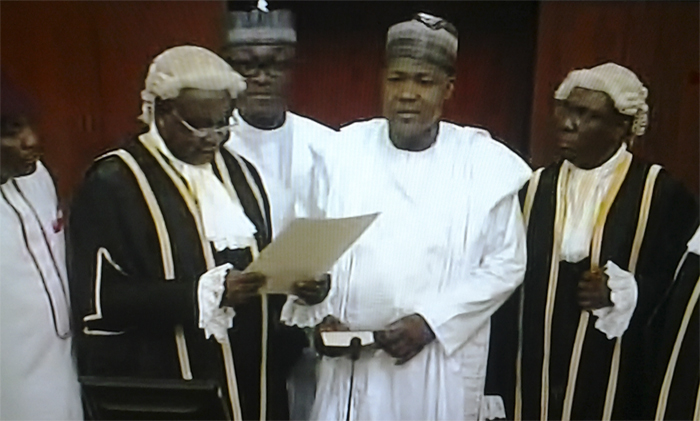 Yakubu Dogara, in white, taking his oath of office as Speaker, House of Representatives.

Members of the House of Representatives have elected Yakubu Dogara, who represents Bogoro/ Tafawa Balewa federal constituency in Bauchi state, as the Speaker of the 8th Assembly.

Mr. Dogara is emerging the speaker against the wish of his party, the All Progressives Congress, APC, which had on Saturday conducted a mock election to choose Mr. Gbajabiamila as the party’s official candidate.

Mr. Dogara and his supporters ignored their party and stated that they prefer to be beaten at the floor of the House.

His chances to win the post received a boost early Tuesday when the opposition Peoples Democratic Party, PDP, adopted him as its candidate and advised its members to vote for the Bauchi lawmaker.

Mr. Dogara was the chairman House Services committee throughout the life of the last assembly.
More Details later.