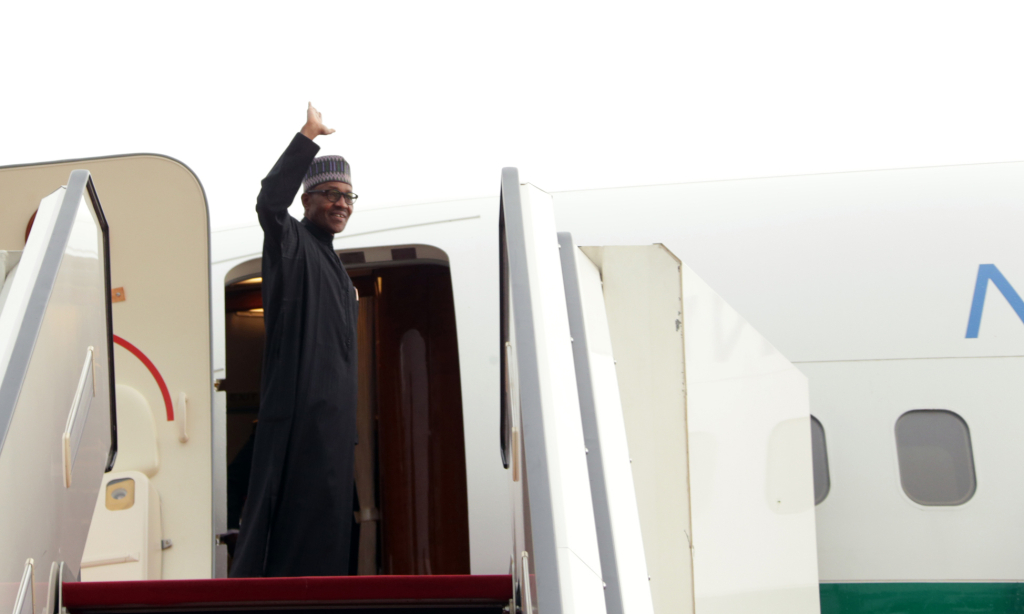 President Muhammadu Buhari on Sunday departed Nigeria to attend the G-7 Summit which begins in Bavaria, Germany on Sunday.

According to a statement by his spokesman, Garba Shehu, the Nigerian president was accompanied by Governor Kashim Shettima of Borno State, former Lagos State Governor, Babatunde Fashola, and former Chief of Army Staff, Abdulrahman Dambazau and other officials.

Although Mr. Buhari is yet to appoint his cabinet since he was sworn in on May 29, Messrs. Fashola and Dambazau have been tipped to be nominated as ministers with the latter tipped to be appointed as either the Defense Minister or National Security Adviser.

Mr. Shehu had stated on Saturday that Mr. Buhari was invited to the G-7 summit before he was sworn into office.

“The invitation is a clear indication of the international community’s willingness to cooperate with the new government of Nigeria,” he said.

He added that President Buhari would not be participating in the main meetings, since Nigeria is not a member of the G-7 group.

Mr. Buhari arrived Munich, Germany at about 3.25 p.m. local time for the two-day official, Mr. Shehu said in a statement on Sunday afternoon.

“President Buhari who was received on arrival by the Vice Minister-President of Bavaria, Mrs. Inge Aigner was accompanied by Governor Kashim Shettima of Borno State, former Governor Babatunde Fashola, Gen. A. Dambazau (rtd.) and the Permanent Secretary of the Ministry of Foreign Affairs, Amb. Paul B. Lolo.”

The spokesperson stated that other invited Heads of State and international institutions who will join President Buhari at the working session with G-7 leaders tomorrow at Elmau include President Jacob Zuma of South Africa, President Ellen Johnson Sirleaf of Liberia, President Macky Sall of Senegal, President Beji Caid Essebsi of Tunisia and Prime Minister Hailemariam Desalegn of Ethiopia.

Before leaving Munich for Nigeria on Monday, Mr. Buhari will hold bilateral talks with Chancellor Angela Merkel of Germany and Prime Minister Stephen Harper of Canada on the sidelines of the G-7 Outreach Programme.

He is also expected to meet President Barack Obama, President Francois Hollande of France, Prime Minister David Cameron of Britain, and other G-7 leaders in the course of the Outreach Session and a working lunch at the Elmau Castle.

Mr. Shehu said the head of the Bavarian regional government will host a dinner in honour of President Buhari and other leaders invited to the G-7 Outreach Programme on Sunday night.

Iran calls for removal of “oppressive” sanctions to revive economy