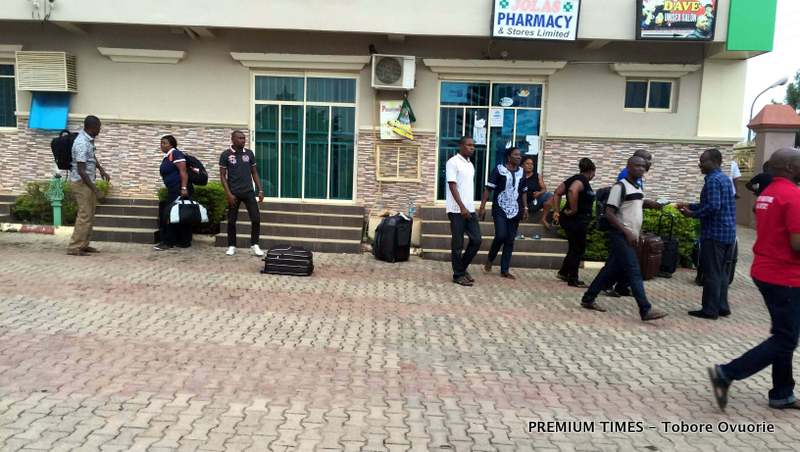 Nigerian volunteers to Sierra Leon, Liberia locked up in hotel over unpaid bills

Nigerians who who returned to Abuja more than a week ago after months of volunteer service in the fight against Ebola in Liberia and Sierra Leone were Wednesday morning locked up in Summit Villa hotel, life camp, Abuja over unpaid hotel bills.

The volunteers returned to the country May 23rd, having represented the country at the AU’s mission in Liberia and Sierra Leon to help eradicate the Ebola scourge there.

Unfortunately, since their return, the volunteers allege being humiliated at the AU mission and now in Nigeria.

The Federal Ministry Of Health through Sanni Gwarzo, head of the returnees committee, had lodged the contingents in various hotels including Summit Villa hotel. Unfortunately, the hotel bills have not been paid and the volunteers have complained even about feeding.

The volunteers were supposed to be quarantined for 21 days upon their return to the country. However, those from Liberia were ejected from their hotel rooms on Friday May 29 while those from Sierra Leon were ejected Wednesday, June 3. Their ejection, PREMIUM TIMES findings reveal was on the instructions of Mr. Gwarzo.

But the Dangote Foundation at a press briefing Friday May 29 had announced a donation of N60million meant for accommodation and feeding of the returnees while in quarantine for 21 days.

The Federal Ministry had acknowledged receipt of the money at the event, thanking the foundation for its contributions to the welfare of the Ebola volunteers.

The foundation has in total donated N900 million towards the eradication of the virus in Nigeria. But the contingents allege that they received nothing of the Dangote’s donations since 2014 when its started making donations towards their care over the Ebola virus outbreak.

When the contingents were to leave the hotel 6am, the hotel management locked the gates saying none of them would be allowed out because the Ministry of Health was owing N7.3million. Most of the contingents had early morning flights to catch and were about missing them when PREMIUM TIMES was called in.

One of the hotel staffers who spoke off the record said the FMOH has defaulted in paying its debt so the contingents won’t be allowed out.

Mr. Gwarzo had switched off his phone since the previous day when it dawned on him that there was no money to pay the contingents or the hotel, PREMIUM TIMES understands.

Davidson George, a member of the government committee, who turned up at the hotel, called the Permanent Secretary in the health ministry, Linus Awute, who pleaded with the hotel authorities to let the contingents go.

“Please save me from this scandal…I’m on my knees begging in the name of God…” he begged the hotel management representative crying on phone.

Mr. George had to deposit his identity card with the hotel standing as surety.

Further findings by PREMIUM TIMES revealed that the controversial sum was yet to be paid because Abdulsalami Nasidi, Chief Executive Officer, Nigerian Centre for Disease Control and prevention (NCDC) wanted to pay the bill in cash, while Mr. Awute kicked against it.

Mr. Awute had demanded an invoice from the hotel as paying cash for such an amount is illegal.

All efforts to get Mr. Nasidi for comments was futile as he neither responded to text message questions nor picked this reporter’s calls.

PREMIUM TIMES had earlier called him Friday May 29th over alleged financial misappropriation allegations. He had switched off the call on our reporter.

Meanwhile, the contingents at Royal tropicana hotel, Utako Abuja are scared of being locked up as well as the government is owing the hotel over N5million.

Volunteers who spoke with our reporter said this was the same humiliation they faced while in Sierra Leon and Liberia as hotel managements and apartment owners locked some of them up over none payment of bills.

Some Nigerians were even arrested and detained in Sierra Leon over none payment of their accommodation bills by the AU, while others’ properties were thrown out.

NDLEA has no constitutional right to extradite me – Kashamu