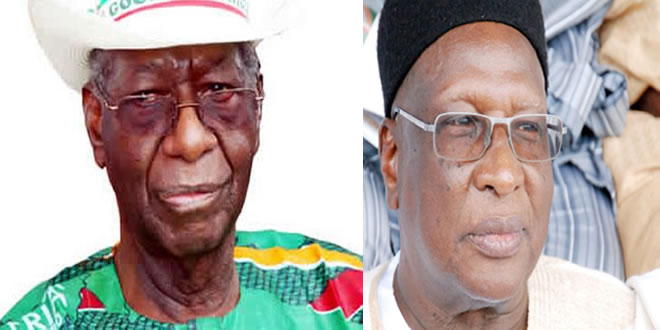 PDP leaders who may retire from politics following Buhari’s emergence

The victory of the All Progressives Congress, APC, and its candidate, Muhammadu Buhari, in the March 28 presidential election may force some leaders of the Peoples Democratic Party, PDP, into retirement from politics.

Goodluck Jonathan of the PDP became the first incumbent Nigerian president to lose re-election after he lost to Mr. Buhari on March 28. The latter was sworn in as president on May 29.

Some of the PDP leaders have given indications they would play very minimal role politically in Nigeria in the aftermath of the elections, while for others, the demystification of their relevance politically may influence their retirement.

Among those that could retire or lose political relevance are Tony Anenih, Ibrahim Babangida, and Edwin Clark.

Governor Adams Oshiomhole of Edo state was the first to declare that it was time to retire some “godfathers” in the PDP. According to the APC governor, recent elections have demystified the PDP leaders.

One of those Mr. Oshiomhole was referring to is the immediate past chairman of the Board of Trustees of the PDP, Tony Anenih.

It can be said that the governors’ prophecy has come to pass, because following Mr. Buhari’s victory, Mr. Anenih resigned as chairman of his party’s BoT.

Mr. Anenih’s foray into mainstream politics can be traced back to 1981, when as the chairman of the ruling National Party of Nigeria, NPN, in the old Bendel State, he saw to the victory of Samuel Ogbemudia as governor of the state. He was also the national chairman of the Social Democratic Party, SDP in 1992/93 when late Moshood Abiola was elected as President in the June 12, 1993 election.

In the PDP, the Esan chief was always in the thick of things whenever a need arose to “fix” an endemic problem and he has consistently delivered until recent times when he was apparently demystified, first by Mr. Oshiomhole in Edo State and finally by the 2015 general elections.

Since its defeat in the 2015 general elections, leaders of the PDP hardly mention Mr. Anenih’s name as they go about trying to rebuild their party ahead the next elections.

Another major casualty of Mr. Buhari’s victory is former Head of State, Ibrahim Babangida, often referred to as IBB. The gap-toothed retired General has been a member of the PDP since inception in 1998 and has tried to run for the office of President under the platform of the party on three different occasions – 2003, 2007 and 2011.

Although IBB has failed to get the ticket of the PDP each time he tried, he remained an influential member of the PDP and retained influence on persons elected on its platform.

From Mr. Obasanjo to late Umaru Yar’adua and then Mr. Jonathan, all presidents elected under the PDP found it easy to “work” with IBB because he presented himself as a party member without leaning to any known faction or group within the party.

When Mr. Obasanjo was in office, IBB never publicly criticized him even during the third-term debacle. He was also a confidant of President Goodluck Jonathan and sources at the State House say the President often “runs” to IBB whenever a matter was giving him “serious headache”.

IBB led the coup that ousted Mr. Buhari as president in 1985 and although both men seem to have resolved their differences, the former is not expected to wield any influence on Mr. Buhari’s presidency.

Another prominent member of the PDP who could retire from politics is a former Federal Commissioner of Information, Edwin Clark. Apart from the fact that age is not on the side of the Ijaw chief, who is over 80 years already, his fanatical support of the candidature of Mr. Jonathan means that for him it was all or nothing.

Unless he decides to retrace his steps to the APC, a party he helped form, former National Chairman of the defunct National Republican Convention, NRC, Tom Ikimi, may have seen his best days in politics.

Mr. Ikimi was the chairman of the merger planning committee when the defunct Action Congress of Nigeria, ACN, All Nigeria Peoples Party, ANPP, and the Congress for Progressive Change, CPC, decided to dissolve and form the APC. He even hosted most of the meetings of the group in his personal residence in Abuja.

However, he parted ways with the APC after failing to get the nod of the party to emerge as the national chairman. He subsequently rejoined the PDP, but has been quiet since then.

The outspoken former Minister of Foreign Affairs is not likely to be relevant politically unless he returns to the APC.

At a period most of the leaders of the north turned their back on ex-president Jonathan, the controversial Kano politician, Tanko Yakassai, chose to support his re-election bid.

Mr. Yakassai has been in politics since the first republic as a member of the radical group, Northern Elements Progressive Union, NEPU. However, Mr. Buhari’s emergence coupled with Mr. Yakassai’s age could mean the latter could cease to be relevant politically.

The immediate past Minister of Education and former governor of Kano State successful broke the jinx of failure to win a second term in the state when he won re-election in 2007 under the ANPP.

Mr. Shekarau became governor in his fist attempt largely on the back of the popularity of Mr. Buhari who was the ANPP presidential candidate in 2003. However, he fell out with Mr. Buhari and was one of the people who forced the president to leave the ANPP and form his own party, the CPC.

The former governor and Mr. Buhari again found themselves on the same side in the APC after he chaired ANPP’s merger committee and played a prominent role in the formation of the new party.

However, problems arose for Mr. Shekarau after Governor Rabiu Kwankwaso and four other governors dumped the PDP and joined the APC in 2013.

With Mr. Kwankwaso’s arrival to the APC and instantly becoming the leader of the party in Kano, Mr. Shekarau found it difficult to stay and moved in opposite direction to the PDP which saw him picking a ministerial slot from the state.

Apart from the PDP’s loss in the presidential election in the state, Mr. Shekarau’s preferred governorship candidate, Sagir Takai, lost his bid to be Kano governor in the last election. The swearing-in of Mr. Buhari on Friday may be the final nail to Mr. Shekarau’s political coffin, unless he chooses to return to the APC.

Bamanga Tukur is one of the founding members of the PDP and was elected its national chairman in 2012.

He was, however, forced to resign from office after he fell out with most of the PDP governors who found his style autocratic. His feud with the governors led to the departure of the famous five governors who eventually found themselves in the APC.

Political commentators often ascribe the defection of the five governors as one of the strongest reasons why PDP lost the 2015 election.

By the time the next election holds in 2019, Mr. Tukur would be 84 years old and opposition politics is expected to be the last thing occupying his time.

The former Vice President in the Second Republic is also one of the founders of the PDP.

Although often sidelined in the affairs of the party, its leaders at various times run to the octogenarian whenever they fail to overcome one crisis or another.

With the failure of the PDP in the last election, Mr. Ekwueme is effectively shut out of national politics and is expected to retire from active politics.

FIFA U20 World Cup: Mali get first win for Africa