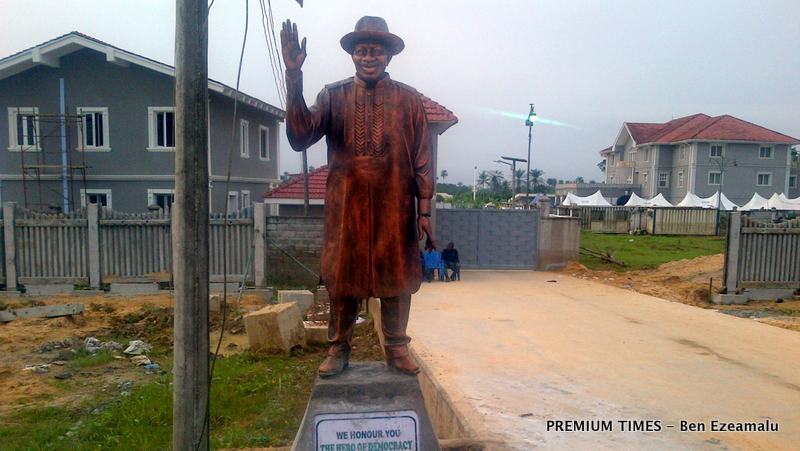 A statue of Goodluck Jonathan stands at the entrance to his Otuoke residence.

Hundreds of people in Otuoke, Friday, marched and danced along the major road leading to the reception venue for Goodluck Jonathan, Nigeria’s immediate past president.

Mr. Jonathan and his wife, Patience, arrived Otuoke at about 6 p.m. after a civic reception organised in Yenagoa by Seriake Dickson, the Bayelsa State governor.

Among those who accompanied them include Ben Murray-Bruce, a senator-elect from the state, Onyeka Onwenu, veteran singer; Mulikat Akande, majority leader of the House of Representatives; Idris Umar, former Transport Minister, and Pius Anyim, former Secretary to the Government of the Federation.

Apart from the host governor, Mr. Dickson, Olusegun Mimiko was the only Peoples Democratic Party governor who attended the former president’s reception ceremony.

Activities to welcome Mr. Jonathan to Otuoke hit a feverish pitch on Friday morning as various community groups hoisted their banners around the community as they rolled out their drums.

Police patrol vans were also stationed at the two roads leading into Otuoke, while security was beefed up at Mr. Jonathan’s villa.

After the former president’s arrival to Otuoke, one of the roads leading into the community was completely sealed from vehicular movement.

At the Dame Patience Jonathan Square, the venue of the reception, dozens of people pushed against the shut gates of the square as security agents struggled to contain them.

In his speech, Mr. Jonathan described the reception as his homecoming.

“I was born in this small village, years back. The village has grown a little, but of course it’s still a small village,” he said.

“But, of course, with politicians you must have your base, your unit, where your umbilical cord was buried, that is where you belong, and this is my place of birth.

“All my elections I came back here to vote, myself and my wife.

“Today is historic because since I left this village I’ve never spent a reasonable time here, just come maybe one night two nights and go back. At least, I’m coming home to rest now.”

Mr. Jonathan apologised to his guests for the difficulties they encountered in accessing his community.

“It’s not easy to get here because the governor is still building the airport, so you have to pass through Port Harcourt,” he said.

“For 16 years we contributed to societal development, starting from the state and ended up in Abuja. For myself and my wife, we say thank you. We belong to this place, we are one of you and we are back.”