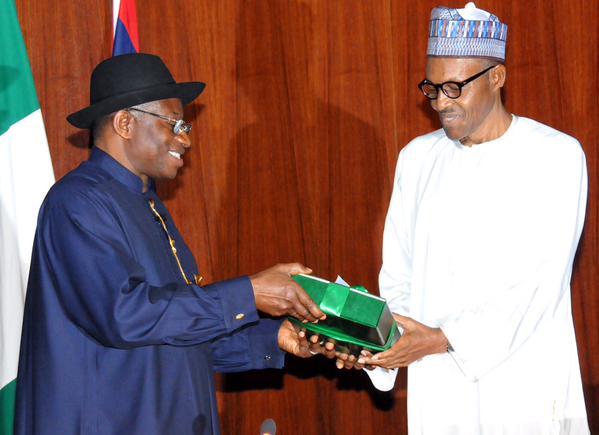 Nigeria’s President-elect, Muhammadu Buhari, on Thursday said that outgoing President, Goodluck Jonathan, could have made things difficult by refusing to accept the outcome of the election, but rather choose the path of honour.

Mr. Buhari said Mr. Jonathan’s decision to make the telephone call to him changed the course of Nigeria’s history and earned him a place in the country’s history.

Speaking shortly after receiving the handover notes from Mr. Jonathan, at the council chambers of the presidential villa, Mr. Buhari, who takes over the reins of government Friday, said, “ Since the telephone call you made you have changed the course of Nigeria’s political history”.

“For that you have earned yourself a place in our history, for stabilising this system of multiparty democracy system and you have earned the respect of not only Nigerians but world leaders,” the president elect said.

“All the leaders that spoke to me and congratulated us for arriving at the point we arrived, mentioned this and I could sense relief in their voices that Nigeria has made it after all and this is largely owed to a situation.

“If you had attempted to make things difficult, you could have made things difficult and that would have been at the expense of lives of poor Nigerians, but you choose the part of honour and may God help all of us. Thank you very much, your excellency,” Mr. Buhari said.

The president elect, however, said he could not comment on the handover notes handed him by outgoing President Jonathan until he reads and digest them.

Mr. Jonathan, who had earlier read a speech reeling out some of the achievements of his administration, handed over an executive summary of the hand over notes to Mr. Buhari, alongside the report of the national conference held in 2014.

“This will give you a mission statement of the commitment of this government for the past five years and the directions we are going that will help you to navigate,” Mr. Jonathan said.

“So is my pleasure on behalf of the Vice President, members of the executive council and other senior functionaries to formally hand over these handover notes to Gen. Muhammadu Buhari, the President elect who will assume office tomorrow. Congratulations.

“There is another document that I will hand over to you, to me this is more important than the handover notes. The handover notes is the activities of an administration, it shows where we started, where we are going, in some of the cases you’ll follow, in other cases you may take other angle.

“But this is a document that was compiled by Nigerians, the report of the National conference 2014. We gathered almost 500 Nigerians from other works of life, they were not influenced by government in any way. And most of the recommendations here, if it is followed most of the grey areas even in our politics will be smoothen out. Most of the areas where people complain bitterly; corruption, everything, this document deals with them. Some people here were members of that great body of about 500 eggheads.”

Mr. Jonathan, who described the report as the baby of the nation, said his administration “was unable to implement because of the shortness of time” however “we have sent a copy to the National Assembly but is a document that we are very hopeful that your government will look into it and give it the attention it requires.”

The president in his remarks also noted that his administration has done its best to intervene robustly and impact positively on key aspects of the country’s national life.

He said no doubt, challenges still abound, but they are surmountable through overwhelming national transformation and commitment.

Mr. Jonathan said, “As I we hand over the reins of government, I believe that our nation is secure, our democracy is stable, and the future is bright. Let us all work together and with greater resolve, continue to build a stronger and more prosperous nation.”

The Vice President, Namadi Sambo, who was the chairman of the Federal Government’s transition committee, in his remarks, said when properly laid down, the handover note exercise will form part of “our political culture”.

He said the committee worked together painstakingly and in an atmosphere of cordiality. He thanked members of the committee for the time they put in to produce the documents.

The secretary to the government of the Federation, Pius Anyim, in his remarks said the committees had interfaced and the Federal Government committees had submitted the handover notes to the incoming administration.

The chairman of the All Progressives Congress’s transition committee, Ahmed Joda, confirmed the receipt of the handover notes from the federal government’s committee. He noted that the committee was still studying the result and it will be handed over to the President-elect after due study.

Messrs. Jonathan and Buhari took a tour of the Presidential Villa as soon as the later arrived.

On a one on one, Mr. Jonathan took Mr. Buhari on a tour of the red carpet which houses the President’s office and other presidential meeting rooms as well as other parts of the Aso Rock.

Mr. Buhari arrived Nigeria from the United Kingdom on Thursday morning but was at the Presidential Villa some minutes early, keeping to the 11 o’clock assignment.