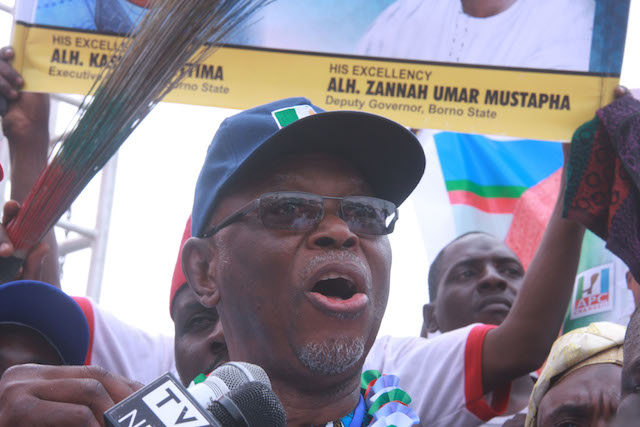 The All Progressives Congress has said President Goodluck Jonathan is handing over a nation in deep crisis, even as his administration continues to contrive more crises without making any effort to solve any of them.

In a statement issued in Abuja on Sunday by its National Publicity Secretary, Lai Mohammed, the party, , appealed to Nigerians not to lose hope, despite the daunting challenges they are currently facing in this atmosphere of contrived chaos.

It said help is on the way.

”In a few days’ time, President Jonathan will hand over to President-elect Muhammadu Buhari,” the APC said. Never in the history of our country has any government handed over to another a more distressed country: No electricity, no fuel, workers are on strike, billions are owed to state and federal workers, 60 billion dollars are owed in national debt and the economy is virtually grounded.

”Today, Nigerians are roaming the streets, jerry cans in hand, searching for everything from kerosene to fuel to diesel to power their homes, keep their vehicles on the road and keep their businesses going. They are paying as much as 300 Naira per litre for fuel, if at all they can get it. Yet their government is not saying a word about the situation.”

APC said while the Jonathan Administration has “arrogantly” told Nigerians that it remains in office and in power till May 29th, all it has been doing is sacking people and making new appointments as if it had been deprived of the opportunity to do so in the past six years.

”They say they are in office till May 29th, but they do not care how workers in 18 states, who are owed a total of 300 billion Naira in salaries under their watch, or federal workers who are owed N400 billion, will be paid. Yet they are running a budget of N1trillion deficit.

”They have deliberately stopped meeting their obligations to oil marketers, which is now around 200 billion Naira, hence no one is lifting petroleum products anymore. If the current energy crisis is not solved soonest, the telecommunications sector could even be grounded in a matter of days as service providers will have neither electricity nor fuel to power their base stations. Of course the aviation sector has already been left comatose by the fuel crisis. The whole scenario reeks of sabotage.”

APC said before PDP and Jonathan Administration’s spin doctors distort its message, it is important to let Nigerians know that the party (APC) is not engaging in lamentations but simply keeping the citizenry informed of the situation on the ground, with just five days to handover date.

”If we thought the nation was being well managed and there was no problem, we would not have embarked on a campaign of change,” the party said. “While we are ready, willing and able to begin to address the mammoth challenges facing us as a nation as soon as we assume office at the centre in a few days’ time, we will not hesitate for a second to keep Nigerians informed of how we have been brought to this sorry pass, with a view to avoiding such a tragic turn in the future.”

It expressed sadness that the nation has been on auto pilot for the past several weeks, as the outgoing administration has shown neither the capacity nor the willingness to resolve any of the crises it has contrived and foisted on the nation.

”This is the most vivid manifestation of the old saying that literally translates to a departing office holder defecating on the chair he is vacating,” APC said.

7 signs he is losing interest in the relationship