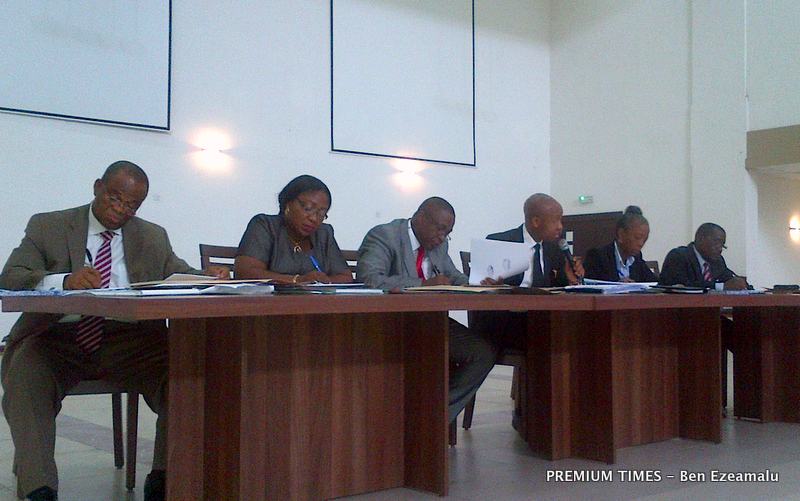 PDP under fire over plot to frustrate probe of killings, destruction during 2015 elections

Human rights and civil society activists have condemned the move by the Peoples Democratic Party to halt the proceedings of the Commission of Inquiry investigating alleged politically-motivated killings in Rivers state.

All the activists who spoke to this newspaper  on Tuesday described the party’s action as “disappointing” and an indication that it has something to hide.

“I wouldn’t want to be a part of a process that does not obey the rule of law, so I’m bringing your attention to this. It is the duty of the panel to obey the court,” Mr Aguma said.

The head of the commission, Chidi Odinkalu, however resisted the move to stop the sitting. He argued that the panel was not served the order and fixed Wednesday for the commission to hear counsel’s arguments and consider legal authorities on the issue.

But Speaking to PREMIUM TIMES Tuesday, head of the civil society group, Coalition Against Corrupt Leaders, Debo Adeniran, wondered why the PDP would want to halt a commission seeking to address something as important as the violation of the fundamental human right to life if it is not complicit in the offences the commission is probing.

“Those who obtained the injunction and the judiciary that gave the injunction are making a statement that they are guilty as suspected because if they are clean, they would be happy to appear before the commission of enquiry to defend themselves by presenting evidences and witnesses that will exonerate them from the suspicion or allegation,” Mr. Adeniran said.

Similarly, Convener of Say No Campaign Nigeria, Ezenwa Nwagu, described the injunction by the PDP as disappointing.

He said although injunctions are part of our legal system, they should not be exploited to come in the way of processes set up to bring people that committed heinous crimes like murder to justice.

Mr. Nwagu said he believed the injunction would only delay but not stop the inquiry from holding. He however suggested taking the matter to the International Criminal Court if it becomes impossible to hold the investigation in Nigeria.

“It is an indication that somebody is afraid. But that can only delay the day of their judgement,” the activist said. “Bear in mind that the issue of murder points clearly to the fact that even if our own internal legal system is unable to bring to book those who have committed these heinous crimes, we have now the ICC that have shown very clear interest in the election and its outcome and has vowed to ensure that perpetrators are brought to book.”

The Chairman, Civil Society Network Against Corruption, CSNAC, Lanre Suraju, said it would be nice to know why the PDP obtained the injunction to stop the sitting.

He explained that if it was on the grounds of bias of one or some of the commission’s members then the party was well within its rights and power to do so and such a member or members should vacate the commission.

However, he said the party would  be doing even its own member a great deal of injustice if it merely seeks to stop the inquiry due to its rivalry with the incumbent government.

Mr. Suraju reminded the PDP that some of its own members may also have been affected by the violence that occurred before and after the elections in the state and stand to benefit from the panel’s proceeding.

“If it is to stampede the commission from proceeding with the probe and investigation of circumstances leading to the state of violence experienced in Rivers days and also weeks before and after the election I think that would be unfair to victims of those avoidable violence,” Mr. Suraju said. “There should be a need for us to stem political violence and loss of lives that were perpetuated by politicians in the country,” he said.

The CSNAC chairman added, “I will support such an investigative effort on the part of the government of Rivers State and it would be important to understand on what basis the PDP in particular, because it is not established to say it was only APC members that were victims of the violence to the extent that PDP members would not benefit from the enquiry.”

He condemned the PDP counsel for trying to forcefully stop the commission from sitting, arguing that by so doing Mr. Aguma acted beyond the limit of his duty as a lawyer.

He said his role should have been to make sure the court processes are properly served on the commission.

“It is the duty of the lawyer and the court to serve the processes on the commission and allow them to respond to it appropriately,” Mr. Suraju said. “If they fail to respond, it is not within the power of the lawyer to try to enforce the injunction. It should be left to them to commit further offence by disregarding the order of the court. It should also be left to the court to take appropriate measure on that.”

The Commission of Inquiry, instituted by Chibuike Amaechi, the Rivers State governor, is investigating damage to properties and grievous bodily harms to persons ahead and during the presidential and gubernatorial elections in the state.