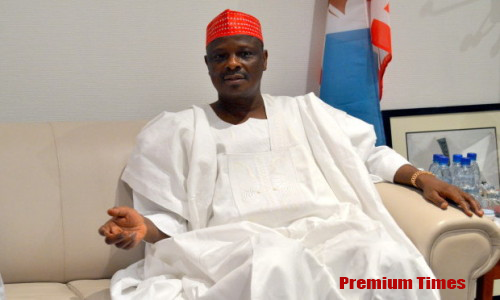 Governor Rabiu Kwankwaso of Kano State has warned that the delay by the leadership of his All Progressives Congress, APC, to zone positions in the National Assembly leadership may work in favour of the Peoples Democratic Party, PDP.

The two-term governor, who was also elected senator in the March 28 polls, said he had feelers that some APC lawmakers were already working for the PDP.

“If the APC and indeed the president-elect allow PDP to snatch victory at the National Assembly, then it will be an unusual scenario which they should pay for,” he said while addressing journalists on Sunday.

Mr. Kwankwaso also said he would continue to advise his successor and current deputy, Umar Ganduje, when the latter is sworn in as governor on May 29. He also said he has no fear about the opposition’s decision to challenge his election at the tribunal.

In a related development, local contractors who handled various projects for the state government accused the governor of refusing to pay over N60 billion debt owed them.

Speaking at a press conference, the Chairman of the Nigeria Indigenous Contractors Association, Kano branch, Auduwa Maitangaran, said the debts have affected the lives of most of his members.

“We today find ourselves in a total mess with banks and other debtors nagging them to pay back what they have collected from them,” he said.

Mr. Maitangaran said apart from the high debt owed the local contractors, Governor Kwankwaso’s administration had a preference for foreign contractors for projects in the state.

In his response, the governor said though he was not sure of the total amount owed the contactors, he would pay off a large chunk of it before leaving office on May 29.

He told journalists that his administration was still executing projects and paying contractors.

Mr. Kwankwaso said he inherited N77 billion and $200 million debt from his predecessor and had settled a large part of it.