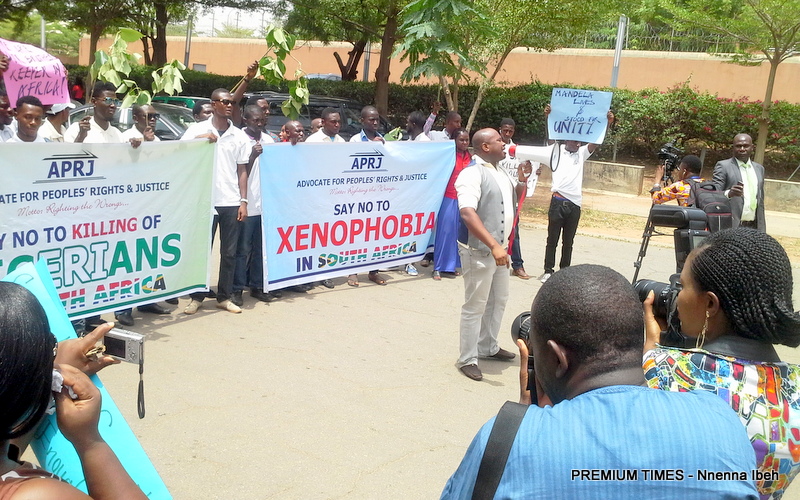 Say No to Xenophobia Protest in Abuja

Nigerians in Abuja, the nation’s Abuja, on Monday registered their grievance over the continued xenophobic attacks on Nigerians and other Africans in South Africa by marching on the South African High Commission.

Deji Adeyanju, one of the organizers of the protest, told PREMIUM TIMES that some of his friends in South Africa told him they were afraid to come out of their homes.

Mr. Adeyanju said one of them, who works in an automobile company, said some of his neighbours in South Africa were wondering what they were still doing in that country.

“We also feel the plight of fellow Africans and foreigners who feel this same way,” Mr. Adeyanju said. “We use the opportunity to call on the South African government to act now.

“We are more concerned about the South African government stopping the violence.”

He said it was worrisome that some pictures distributed on various social media platforms showed South African police officers abating the attacks on foreigners in their country.
He said there must be a call to order.”

Mr. Adeyanju said while many others have called for the evacuation of Nigerians from South Africa, he feels differently about that proposal.

“Evacuation may not be 100 per cent,” he said. “There are Nigerians married to South Africans and many have kids too; we don’t want a bad precedence to be set.

“We are also trying to ensure that whatever we do or whatever fellow Africans do, they are mindful of the fact that their citizens are also living here in Nigeria and other parts of Africa; so South Africa cannot afford to be an enemy of the African continent.”

Another protester, Tolu Ebo said, “They have to stop it (xenophobia) now. The South African government cannot tell me that they don’t know the people that are involved in these acts. Their faces are all over the place. Why have they not been brought to book.

“This is not how we play diplomacy. No! They have to stop this and they have 24 hours to stop this.”

Before stating their mission to the commission’s representative, the protesters sang Nigeria’s national anthem in a show of solidarity.

Mr. Shongwe was advised by the group to give a firsthand situation report on efforts by the South African government to stop the attacks and killings of other Africans in South Africa.

Mr. Shongwe said to the best of his knowledge, 84 people had been arrested since the violence erupted.

He said it was unfortunate the attacks were happening but assured that the South African government was doing everything possible to put the situation under control.

“These attacks, they are not acceptable because we are brothers and sisters but I can assure you that the government is serious in bringing this under control,” Mr. Shongwe said.