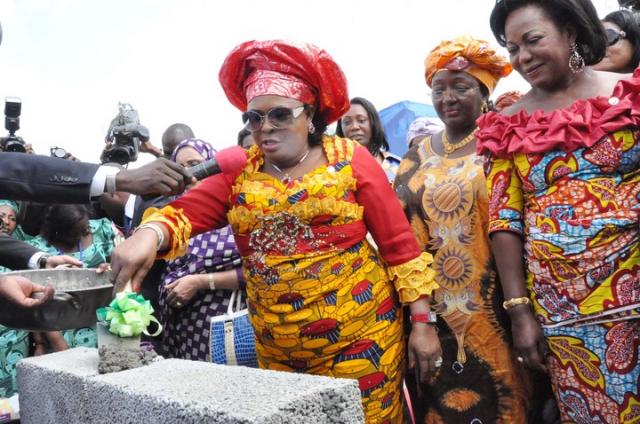 ‘What do you call corruption?’ Patience Jonathan explains

Nigeria’s First Lady, Patience Jonathan, on Friday took to the podium to explain to women in Akwa Ibom State the meaning of ‘corruption’.

While addressing the crowd during the Peoples Democratic Party Women Presidential Rally in Uyo, Mrs. Jonathan said the promise by the All Progressives Congress to fight corruption were “all lies”.

Mrs. Jonathan urged the women not to vote for the APC because, according to her, they have nothing to offer.

“A bird at hand is worth a million in the bush. Nigerian women, let us shine our eyes. Women of Nigeria, are you ready to go to prison? Are you ready to go and give your father food in the prison? It is not our portion. We reject it.

“Akwa Ibom State is a PDP state. It’s not for expired drugs, because APC cannot heal you, outdated drugs cannot heal you. Let them call it any name. Just like as my husband younger brother (Governor Akpabio) have said, they will continue changing name until they will reach Ebola. And they will call it Ebola.

“So let them continue changing their name. If they fail this time, because I know they have failed, you will hear they will change their name again. They will change it and answer another name.”

Akon Eyakenyi, the Minister of Lands, Housing and Urban development, was also in attendance.

When it was time for Mrs. Jonathan to deliver the keynote, she rose from her seat, danced her way to the podium, and spoke for about one hour.

“A good man borns (sic) a good son. You cannot deliver what you don’t have, and that’s why he has brought somebody that can also deliver you from the APC. The one that will heal you,” Mrs. Jonathan said of Mr. Akpabio and the PDP gubernatorial candidate in the state.

The First Lady also described the PDP as a moving train that is unstoppable.

“Remember I was here in 2011 and I came here, I told you that PDP is a good party and I told you vote Dr. Goodluck Ebele Jonathan and Sambo. And you know that they will never fail you. And they promised you 35 percent, and they fulfilled their 35 percent,” she said.

Mrs. Jonathan said the PDP would increase the quota of women’s participation in governance if the party wins in the elections.

“And they told me that this time we have given you 35 percent, go and tell their women that if they vote us back, that we are going to give them 45 percent.”

“Ask them, when they were there, what did they do for you? Women of Nigeria, did they do anything for you? This is the time they have come to tell you ‘I will,’ I will what? What you did not do before, is it now that you will come and do it?

“Remember that they were in that Aso Rock before. All the things that they keep there, they did not take it. Now they want to go back there. Ask them a question, what do you forget there?
Won’t you leave Aso Rock for the new generation? Dr. Goodluck Ebele Jonathan and Governor Godswill Akpabio are the new generation.”

“Under SURE-P, Goodluck said that for health sector, that no woman will die again under pregnancy. He said that all Nigerian women you have died enough. Remember before PDP come into power, every 100,000 live births a women that born, 840 will die. 840 will die when they were there o.

Nigeria2015: Why we are worried about Buhari – Governor Akpabio