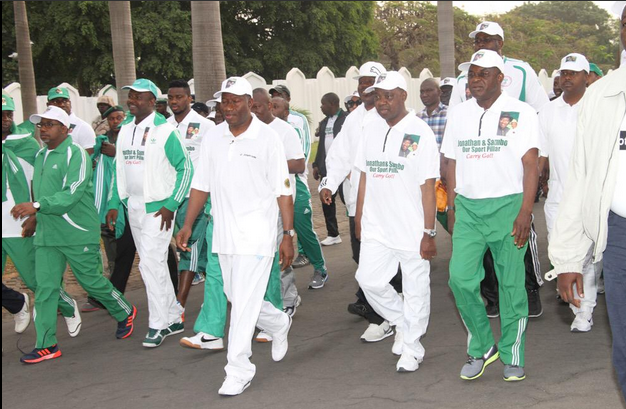 Nigeria does not deserve a 73-year old President – Namadi Sambo

Vice President Namadi Sambo has urged Nigerians not to vote the presidential candidate of the All Progressives Congress, Muhammadu Buhari, in the March 28 election, saying the country does not deserve a leader who is 73.

But Mr. Sambo, 60, believes the former head of state is too old to be President, a sentiment he first expressed in January when he suggested Mr. Buhari is too old and weak to physically lead the war against terrorist group, Boko Haram.

“Our President is a young President,” Mr. Sambo said at a solidarity rally by Nigerian sportsmen and women for President Goodluck Jonathan in Abuja Saturday morning. “And I don’t think this country deserves a 73-year old President.”

He therefore asked the sportsmen and women to allow Mr. Jonathan to “carry go” in the March 28 presidential election.

“Come 28 March, make sure you have your PVC cards …and make sure Mr. President carry go,” he said.

Also speaking at the rally, attended by Nigeria’s leading current and former sportsmen and women, President Jonathan promised to create a special intervention fund for sports if re-elected.

He said the fund will cater for special training programmes for sportspeople, help them advance in academics after their sporting careers, help pay for treatment and rehabilitation for injured sportsmen and women and ensure that anyone who wins medal for Nigeria does not live ‘below average’ after his or career.

Mr. Jonathan also said the Fund would be used to reposition and strengthen the National Institute of Sports in Lagos and the Centre of Excellence in Abuja.

“This special fund will be professionally managed and once it’s in place, Nigeria will begin to dominate sports globally.”

The President said he is “passionate about sports because sports is one of the things that unite this country”.

Earlier, the Minister of Sports, Tammy Dagogo-Jack, had asked Nigerians to ignore the “vague, directionless change” the APC is offering, and instead support Mr. Jonathan to continue in office.

Mr. Dagogo-Jack said the President has made “personal intellectual commitment and sacrifice for the upliftment of sports in Nigeria”.

He said the country needed a leader like him to concretize the “good work he is doing in the sporting sector”.

“If we want the medals to continue coming in, then, we have to support Mr. President to continue because he is a transformational leader who will launch Nigeria to her great era of change,” the minister said.

Speaking on behalf of the sportsmen and women, a former captain of the Super Eagles, Joseph Yobo, described Mr. Jonathan as an uncommon leader who deserves the support of all Nigerians.

He said it would be difficult to find another uncommon President like him when his tenure expires.

The rally, which is part of President Jonathan’s reelection campaign, was attended by sports stars such as Nwankwo Kanu, Austin Eguavoen, Mary Onyali, Peter Rufai among others.