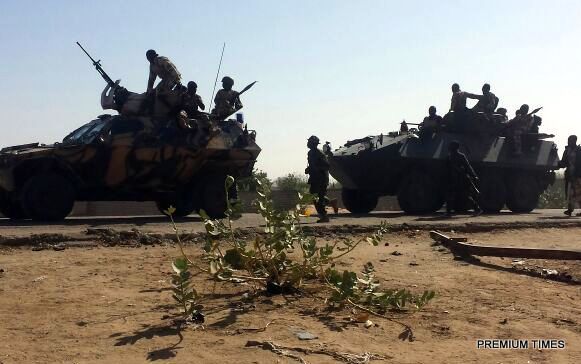 The Nigerian military has stepped up air strikes on Gwoza and Bama, Borno State, ahead of possible invasion by troops aiming to retake the two towns seized by the insurgent group, Boko Haram, last year, the defence headquarters said Monday.

Government forces have made some gains in the last two weeks in the fight against Boko Haram militants, retaking some key towns from them and pushing to eject the group from their strongholds in the North East.

Gwoza and Bama are the two most important towns still under Boko Haram control, after the military announced Saturday it had recaptured Baga, a fishing community near Lake Chad. The military had earlier in the week retaken Monguno, also in Borno State.

Reports from the frontlines are difficult to independently verify.

The military said Monday with the airstrikes, it was preparing for “other phases of the mission”, likely, a full invasion of the areas still controlled by the extremists, who are responsible for more than 15,000 deaths.

“Meanwhile, in furtherance of the mission to clear terrorists from all their enclaves by the military, the Nigerian Air Force has stepped up its air bombardment of identified targets in Gwoza, Bama and Sambisa forest, preparatory to other phases of the mission,” a statement by spokesperson, Mr. Olukolade, said.

He said the airstrikes were successful.

The Defence Spokesperson said, “Having successfully liberated Baga where the terrorists have been marauding, the troops’ attention has now been focused on consolidation of the security of the area to pave way for return of citizens”.

The Nigerian government and the military had been humiliated by Boko Haram’s rapid successes in 2014, with widespread criticism over the government’s handling of the war.

The military has now pledged to reclaim all seized territories, a vow affirmed weekend by President Goodluck Jonathan, who himself has been scathingly criticised ahead of elections in March.

The military said Monday its cordon and operation in Baga showed that some of the Boko Haram terrorists now disguise as women in an attempt to escape.

The statement said the search has resulted in the recovery of arms hidden in various locations.

Mr. Olukolade said apart from terrorists captured during the fight, those hiding in the town have also been arrested. He added that troops were interrogating these suspects.