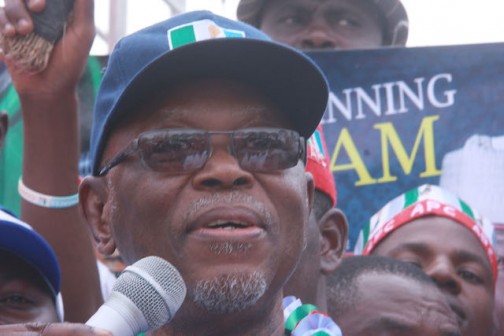 Nigerian military chiefs gave a clear commitment to provide security for elections earlier billed for February 14 and 28, just three days before issuing a warning to the Independent National Electoral Commission, INEC, to shift the polls or risk losing security cover, the chairman of the main opposition party, All Progressives Congress, APC, said Monday.

The APC accused the military of insincerity and bias in its decision to instigate INEC to postpone the elections on claim of insecurity.

The APC National Chairman, John Oyegun, who addressed a press conference at the party’s national secretariat in Abuja, said the top leadership of Nigeria’s armed forces had assured political parties of their readiness to provide security for the general elections on their original dates.

The military hierarchy made the pledge at a meeting with the political parties just three days before writing to the Independent National Electoral Commission, INEC, to warn that they cannot guarantee security if polls go ahead as planned, Mr. Oyegun said.

“At the occasion, the Chief of Defence Staff, Alex Badeh, an Air Chief Marshal, gave assurances of the Armed Forces’ preparedness for the elections. According to him “even though we are busy in the North East, we also have capabilities across the nation.”

Mr. Oyegun said Mr. Badeh also admitted that the role of the military is merely to support the police in providing security during elections.

Mr. Oyegun quoted the Chief of Army Staff, Kenneth Minimah, a Major General, as saying “we are aware of the need for security, before, during and after the elections. We will deploy across the states of the federation in areas we discover that have capacity for violence. We are prepared to ensure we have peaceful elections.”

The APC leader also quoted the Chief of Air Staff, Air Marshall Adesola Amosun as saying “we have commenced the air lift of the materials needed for the elections, starting from Abuja. We will continue with the elections.”

While announcing the shift of the elections last Saturday, INEC chairman, Attahiru Jega, said the commission was forced to reschedule the election after receiving correspondence from the office of the National Security Adviser and the same military chiefs that they cannot guarantee security at the original dates.

Mr. Oyegun asked why security information changed 72 hours after the Service Chiefs announced readiness to provide security for the elections on February 2.

“However, only 3 days later on Friday February 6, these same Service Chiefs wrote to INEC, in a letter, which by all practical purposes could be described as blackmail, saying that they would no longer be able to provide security for the elections? What happened in those 72 hours that brought about this complete volte-face?” he asked.

Military in alliance with PDP

Mr. Oyegun recalled that at the National Council of States meeting last Thursday, INEC reaffirmed its readiness and commitment to hold the elections as scheduled.

He added that although the Service Chiefs briefed the Council that they had security concerns, the consensus of opinion at the meeting was that elections should go ahead nationwide except in the 14 local government areas identified as problematic by the security chiefs.

“After all, it was recalled that in 1999, elections were not held in Bayelsa State because of the activities of militants at the time, but it held all over the country.

“Considering all factors building up to this postponement, it is difficult not to come to the obvious conclusion that the Military High Command is in an unholy and dangerous alliance with the ruling party, the PDP, to subvert the democratic will of the people.

“We have no doubts that the letter sent to the INEC, warning it not to proceed with the elections, emanated from the Service Chiefs’ hands of Esau and President Jonathan’s voice of Jacob,” Mr. Oyegun said.

He also wondered why only the PDP and its supporters are celebrating the postponement.

Mr. Oyegun said at the Council of State meeting, all the former Heads of State in attendance spoke against the postponement except in the 14 LGAs and all the former Chief Justices’ also concurred.

He added that every non-PDP Governor present in the meeting spoke against postponement.

The APC Chairman said the greatest threat to Nigeria’s democracy at present is the way the ruling party has compromised the leadership of the Nigerian military to serve the personal agenda of Mr. Jonathan.

“This is a dangerous game,” he said.

He also recalled a recent court judgment in Sokoto, which ruled that the military had no role in the electoral process.

“What happened with this postponement is that Service Chiefs simply vetoed a democratic process on the directive of President Jonathan. We know what politicization is doing to our once proud military institution.

“We are aware that the Presidency has forwarded a secret memo to all commanders of divisions and battalions of Nigerian Army for a 3-day strategy meeting in Kaduna from today on how to use the military to intimidate voters in APC States to rig election in favour of President Jonathan,” he said.

Mr. Oyegun also said recent revelations about the role of the military in Ekiti elections is demonstrable proof of how far the President Goodluck Jonathan’s government will go to compromise the military as an institution.

The National Chairman of the APC said the Service Chiefs’ letter to INEC demanding a postponement for “at least” six weeks is a “booby trap”. He said embedded in that phrase “at least” is a window to push for another postponement.

“It is clear however, that any further postponement can only lead to a constitutional crisis. The constitution demands at least 30 days before the handover date of May 29th.

“We have strong suspicions but hope this postponement is not part of an agenda to create a constitutional crisis in the country. We are just recently recovering from the crisis precipitated by the political crisis of 1993. We cannot afford another,” he said.

“We are now aware of how PDP used intimidation and arrest to rig the last Governorship election in Ekiti State. We are aware that this is the plan of the PDP.