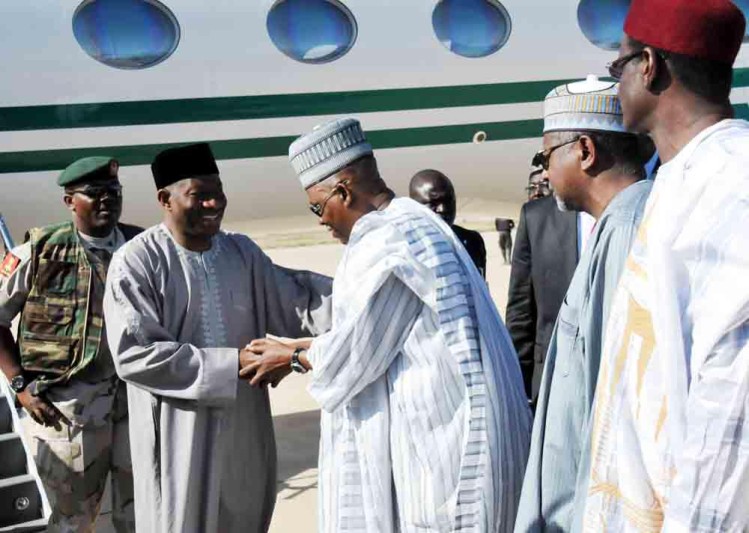 Contrary to claims by the Presidency that President Goodluck Jonathan made a surprise visit to Maiduguri, the Borno state capital, on Thursday out of genuine concern to identify with troops and displaced people, insiders in the president’s campaign have told PREMIUM TIMES the journey was packaged to prepare the ground for Mr. Jonathan’s campaign in the troubled Northeast region beginning next week.

The President, accompanied by the Chief of Defence Staff, Service Chiefs, the National Security Adviser and the Director-General of the National Emergency Management Agency, visited officers and men of the 7 Division of the Nigerian Army at Maimalari Cantonment in Maiduguri, thanking them for their service to the nation and telling them the nation was proud of them and grateful for their dedication and commitment to the defence of the civilian population against terrorists.

But those familiar with Mr Jonathan’s political strategies as he campaigns for re-election said the President was talked into the trip by his political advisers and officials of his campaign council as a way of neutralising criticism over his refusal to visit the region despite an upsurge in attacks by Boko Haram militants who have massacred civilians and security officials.

The president’s party, the Peoples Democratic Party, had recently announced that Mr. Jonathan would visit the troubled zone to canvass votes despite failing to visit the towns where the insurgents have continued to murder and abduct hundreds.

Our source, who asked not to be named so as not to be accused of sabotaging the President’s campaign, said Mr. Jonathan became concerned after widespread criticism trailed the announcement that he would be campaigning in the region.

“The president was advised to try and make at least one non-political visit to the region to shut up critics,” one of our sources said. “Everyone agreed that taking campaigns to the zone without this kind of initial visit might expose the President to ridicule. That’s essentially why he visited today, and I’m telling you this authoritatively.”

Another source said Mr. Jonathan has scheduled campaign stops for Bauchi (Bauchi) on January 22, and Maiduguri (Borno) on January 24.

By the schedule read out to PREMIUM TIMES Thursday night, the president’s campaign train plans to be in Yola (Adamawa) on January 29 and Gombe (Gombe) and Damaturu (Yobe) on February 2.
“With today’s visit to Maiduguri, we believe the ground is now better prepared for campaign stops,” an official said.

The top officials of the President’s campaigns couldn’t be reached to comment for this story. Director General Ahmadu Ali and campaign spokesperson, Femi Fani-Kayode, did not answer or return calls seeking comments.
Meanwhile, our reporter in Maiduguri has sent dispatches giving additional details about the President’s surprise visit to the Borno state capital.

The president arrived Maiduguri on his official jet, accompanied by two other military aircrafts that landed at the Maiduguri International Airport at airport at about 3pm on Thursday.

Mr. Jonathan was accompanied by all the service chiefs of the Nigeria Armed forces as well as the national security adviser, Sambo Dasuki, and few other politicians from the state.

There was no special reception at the airport, even as major PDP politicians in the state including the minister of states for power, Muhammed Wakil, and former governor, Ali Modu Sheriff, were all conspicuously absent at the airport.

The Borno state governor, Kashim Shettima, as well as his deputy, Zannah Mustapha, were at the airport alongside other heads of security forces in the state to receive the president.

The president was immediately driven in a convoy of few motorcades escorted by heavily armed soldiers and counter terrorism unit of the police through the barricaded streets of Maiduguri to Brigadier Maimalari barracks where he addressed troops there. 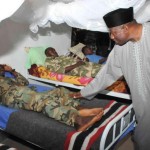 The president who commended the soldiers at the barracks for their gallantry told the troops that his visit to them was in commemoration of the armed forces remembrance day.

Mr Jonathan gave the soldiers the assurances that their welfare would be improved to enable them “crush the insurgents”.

The President was also ushered into the military hospital wards inside the barrack where he met with some of the injured soldiers behind closed doors.

From barracks, the president headed back to the airport after stopping over at one of the IDP camps along the way where he met and sympathised with the displaced persons from Baga town.

He informed the IDPs through an interpreter that the federal government is doing everything possible to ensure they all return to their homes very soon. 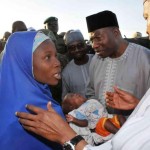 “The federal government is very much concerned about your situation here and I assure you all that we very soon you will all return back to your homes in Bama, Gubio, Ngala and Baga. I want you all to be patient and cooperate with the NEMA and other emergency aid agencies who are instructed to cater for your welfare while in the camp,” he said.

The presidential aircraft took off from Maiduguri International Airport at about 6:20pm.