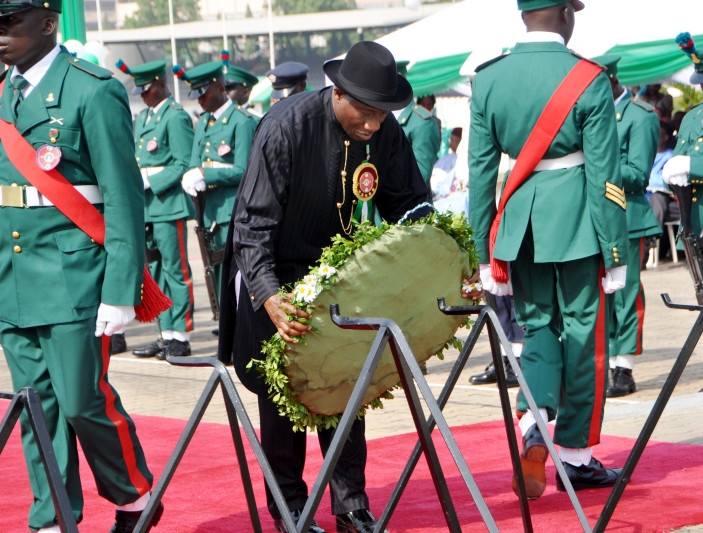 The 2015 Armed Forces Remembrance Day with the theme: “Appreciating the The Nigerian Armed Forces”, started at 10 a.m. with the arrival at the arcade by the president, who is also the Grand Patron of the Nigerian Legion.

Upon the arrival of the president, there was a general salute, rendition of the National Anthem and inspection of parade.

Prayers were offered for the repose of the souls of departed heroes and for peace, security and unity of the nation by Christian and Muslim clerics.

Shortly after the prayers, the president laid a wreath, followed by Vice-President Namadi Sambo, the Senate President, Sen. David Mark, and the Deputy Speaker of the House of Representatives, Emeka Ihedioha.

Others who also laid wreaths are: the Chief Justice of Nigeria, Justice Mahmoud Mohammed, the Minister of Defence, retired Lt-Gen. Aliyu Gusau, and the FCT Minister, Malam Bala Mohammed.

Others who also laid the wreaths include: the Inspector-General of Police, Mr Suleiman Abba, the Dean of the Diplomatic corps and the High Commissioner of Mali to Nigeria, Mr Mahamane Maiga, and the Chairman of the Nigerian Legion, retired Col. Micah Gayya.

After the wreath laying, military and para-military men on parade fired guns shots and saluted.

The president thereafter released white pigeons, which signifies freedom, unity, peace and harmony for the country and also signed the register.

The annual ceremony is held to honour and remember fallen heroes who sacrificed their lives for the freedom and unity of the country.

The ceremony is also meant to appreciate members of the Armed Forces who survived various wars.

The Armed Forces Remembrance Day is globally celebrated on Nov. 11 to honour members of the armed forces who died during the First and Second World wars.

However, in order to reflect Nigeria’s peculiar historical experience, January 15 of every year was set aside to commemorate the end of the Nigerian civil war.