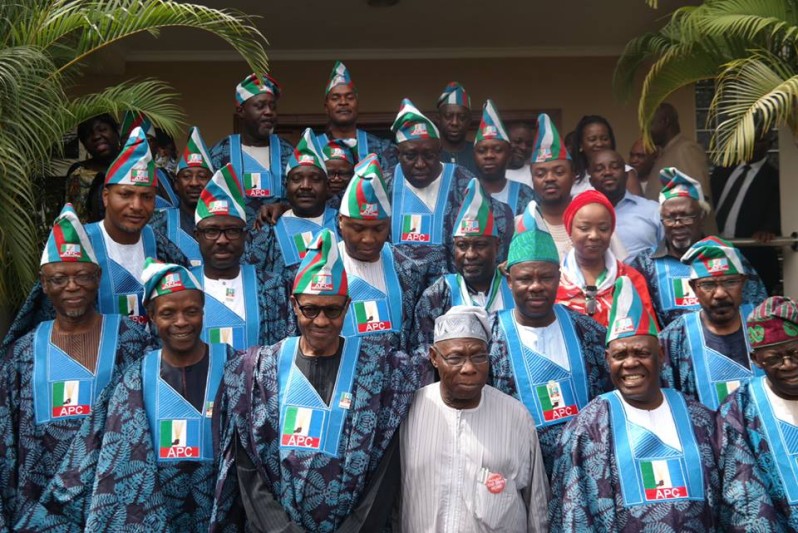 FILE PHOTO: APC leaders pose for photo ops with former president Olusegun Obasanjo after a meeting prior to the 2015 elections

A former President, Olusegun Obasanjo, on Tuesday said he adjusted his itinerary to suit and honour the presidential candidate of the All Progressives Congress, APC, Muhammadu Buhari, who was in Ogun State for his campaign ahead of the February poll.

Mr. Obasanjo made this known when Mr. Buhari led chieftains of the party on a courtesy call to him at his private residence in Abeokuta, the Ogun State capital.

“But let me in a special way welcome Muhammadu,” Mr. Obasanjo said. “Our paths have crossed on a number of occasions and when I was told you are going to be coming to Ogun State, I wasn’t sure whether you will come here or not. But I told my boys -I said well, whatever programme we have outside Ogun State for today, let us shelve it just in case Muhammadu and his party and his team decide to call here.

The former president said what was paramount to him was who would make Nigeria better irrespective of the party the candidate belongs to.
Mr. Obasanjo, however, declared that he remained a member of the Peoples Democratic Party, PDP.

Mr. Obasanjo added that politicians should do away with trivialities and face issues, to tell Nigeria what would be done to better their lots.

“I thought that I should say it today. I will just beg all of you who are contesting to add one to it; you mentioned economy, you mentioned corruption, and you mentioned security. All of you, I will beg of you, to add infrastructure. It’s very important. You may take it as part of economy but I will take infrastructure as special and give it special attention.

“For all political parties that are trying to woo us to vote for them in the coming election; let’s go away from red-herring, let’s go away from trivialities, let’s face issues and tell the people of this country what we will do to deal with these crying problems of our country. Having said that, I will also say that while a party must be microcosm of a nation – and in a nation you will have near saints, devils, rapists, armed robbers and a good party must have all this in them.

“But what matters is that when that party has to go into government, it must look for men and women of character. And we have them in all parties; we have them throughout the nooks and crannies of this country. Again, I wish you well as you go around. I thank you for this visit. I cannot end without reminding you, even though I saw some old faces, but some of us will remain firm at least at the ward level where I am very active in my party.”

In his speech, Mr. Buhari said he came to appreciate the roles Mr. Obasanjo played in his career. He said he needed to further solicit for his support.

“When I set about the programme of going round the states‎, it was decided that we should be taking two states per day. I think we have so far succeeded in doing the South-South and the South East. Whether we can maintain that success I don’t know. But somebody had the temerity to ask me that when I come, shall I call on Chief Olusegun Obasanjo? I don’t think I answered the man. I just looked the other side. I think that I should not come here in whatever capacity without calling to pay my respect.

“Sir, it’s a fact that you know more than all we know about the problem that we are in. But what we’ll do is ‎try to convince you to believe us that we are going to do better. We expect your understanding and support, although you insist in remaining in PDP. I have reached a certain degree of frustration in my attempt for you to try to shift a bit but you have refused.

“Briefly, we have been going around three fundamental issues: security, economy, corruption. This vicious circle is what the APC is determined to break. Because without security, there is no way the country can settle down not to talk of living in it. So many people, educated and uneducated, some said up to 60 per cent, will say Nigeria is sitting on a keg of gun powder.

“And then corruption; we believe that if we are able to stop corruption, a lot of resources will be available to invest in infrastructure, get the factories to reopen, get jobs, and get goods and services. So security, economy, in terms of employment, production, manufacturing, goods and services, and then agriculture will again give impetus to employment. We have to be systematic and work to make sure that the vast land we have is cultivated not only to produce food, but to produce raw materials for agro-allied industries, which used to be very viable but which we allowed to die because everybody has concentrated on getting oil money.

“Now the oil money is dwindling rapidly; I think we better come back to our senses. Sir, briefly, this is what we intend to do and this is contained in our manifesto. We are not going to be inflexible the way some people accused us of doing it. We are going to be dynamic as we go along and that’s why I said we are here to seek for your understanding, for your support, in spite of the political card you hold.”

After the visit, Mr. Buhari led his political train to the campaign ground at Moshood Abiola International Stadium, where he and other chieftains of the party emphasised the need for voters to cast their votes for the party at both states and national levels.