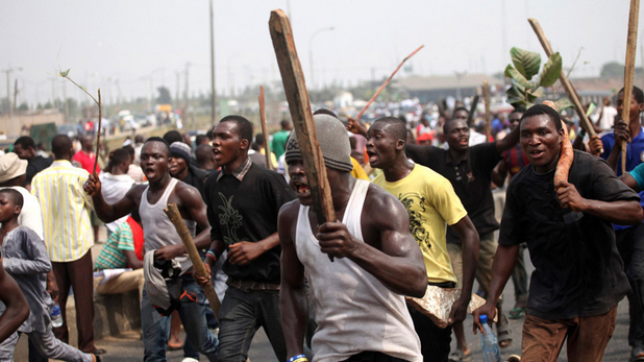 Despite the pledge by Nigeria’s two main political parties to violence free general elections, violent acts by their supporters appear to be on the rise.

Two days after campaign buses of the Goodluck Jonathan Campaign Organisation were set ablaze in Jos, Plateau State, several property belonging to the Peoples Democratic Party in Gombe State were burnt down on Sunday.

A resident of the town, Mijinyawa Ahmed, informed PREMIUM TIMES that a convoy of the APC governorship candidate, Inuwa Yahya, instigated the violence in which the PDP office, two vehicles and several shops were burnt down.

“The APC candidate was on his way to Billiri town for a rally and his convoy suddenly stopped in the town and some of the youth in the convoy began to destroy the billboards of Governor Dankwambo and other PDP property,” Mr. Ahmed said.

The spokesperson of Governor Ibrahim Dankwambo, Junaidu Abubakar, confirmed that property belonging to the party and the governor were destroyed.

“In their quest to destroy the billboards of the governor and burn PDP office, peoples shops were also burnt down completely,” Mr. Abubakar said.

He also said the incident caused serious panic in the town because residents thought they were under attack from members of the Boko Haram sect.

“Many people began running into the bush thinking that Boko haram are attacking them,” he said.

However, the secretary of the APC in Gombe State, Umar Mohammed, told PREMIUM TIMES that the attack was instigated by PDP members

“We were on our way to Billiri to receive decampees and as usual advanced party were asked to move ahead of the candidate’s convoy,” he said.

“PDP members then blocked the road in Gona and refused to allow our members passage which led to a fight between them.

“One of our members was even seriously wounded with a knife and is presently in hospital receiving treatment.”

He said even after the programme in Billiri, words reached the APC that PDP supporters in Gona were armed and ready to ambush them on their way to Gombe.

“When we heard what happened, we had to divert through Deba to go back to Gombe,” he said.

The APC secretary also said the residence of the governorship candidate was attacked three days ago by hoodlums suspected to be PDP supporters.

“They destroyed about five vehicles and injured one of his police security detail who is still receiving treatment,” he said.

When contacted, the spokesperson of the Nigerian Police in Gombe, Fwaje Atajiri, said the police command is not aware of any of the incidents.

Apart from the Jos and Gombe incidents, cases of politically motivated attacks have also been reported in other states.

Some supporters of the APC in Rivers State were shot last week on their way to attend their party’s presidential campaign flag-off in Port Harcourt.

Also, an office belonging to the APC in Okrika, the hometown of Nigeria’s first lady, Patience Jonathan, in Rivers State was attacked with dynamites on Sunday.

Jonathan set to campaign in Ogun, may visit Obasanjo