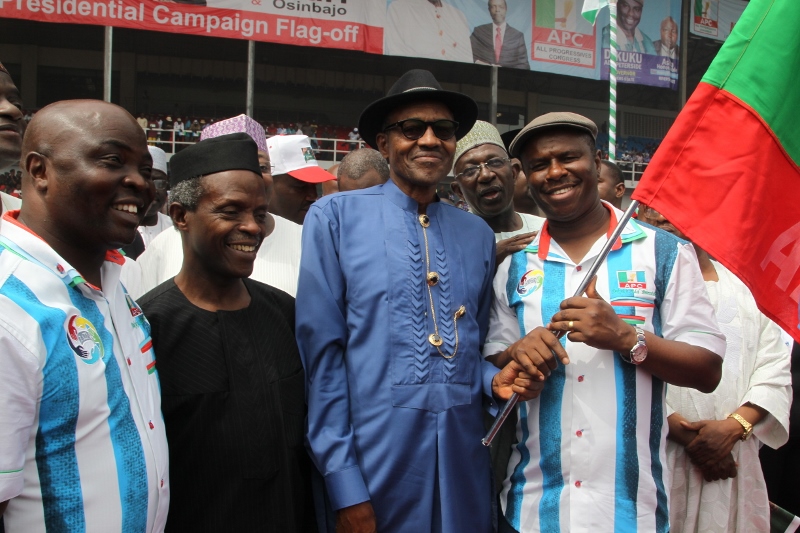 The presidential campaign of the All Progressives Congress, APC, was formally inaugurated in Port Harcourt, the Rivers State capital, on Tuesday with its candidate in the February 14 election, Muhammadu Buhari, promising to tackle corruption, insecurity and economy, if elected.

Mr. Buhari, a former head of state, told the party faithful at the Adokiye Amasiemeka Stadium, venue of the event that he would pick competent hands to run the nation’s economy, which he said is in poor shape.

He also said the level of corruption in the country could no longer be tolerated.

Mr. Buhari asked all eligible voters in the country to secure their voters cards and go ahead to mobilise others to vote in other to effect the desired change, noting the end justifies the means.

“The fundamental issue facing this country is insecurity and the problem of economy which was being made worse by corruption. I assure you that we are going to finally assemble a competent team of Nigerians to efficiently manage the country,” he said.

“I am appealing to you, the damage done to this country is great. The level of unemployment, level of insecurity is intolerable. The journey has begun. It will take time, it will take patience, it will take support from you to make sure that we succeed.”

“Let us make sure that our votes count. The problem we are facing today is the problem of security and economy. We have gathered competent hands to manage the economy and tackle insecurity.

“The level of corruption in Nigeria is intolerable and we will make sure we succeed in fighting corruption when we get there. I wish Nigerians the best of luck and we believe in one indivisible Nigeria.

“I appeal to you to mobilise yourselves to ensure that the end justifies the means. I also urge you to collect your PVC to enable you to vote in order to bring in the change we have been talking about,” Mr. Buhari said.

The APC flag bearer hailed the Rivers State Governor, Chibuike Amaechi, who is also his national campaign director, for his ability to mobilise the people of the state and Nigerians for the task ahead.

He described the governor as the proper person for the position.

He said, “We congratulate the Governor of Rivers State profusely for being the Director General of the presidential campaign organisation. I thank you very much for accepting the responsibility to work with our great party.

“Amaechi has made enormous sacrifice. He earned it, he worked for it and I thank him for accepting it. He got it through a lot of hard work. The way Amaechi mobilises people shows that he is the right choice,” he said.

The governor in his speech earlier said there was a plot hatched by some people he did not name to remove him from office last year.

According to him the people collected money to undertake the task, but failed.

He promised to continue to stand by the people.

“I thank God for this opportunity. I never knew I would be governor. Today, I am governor by the grace of God. I have stayed in office till 2015. By this time last year, the men who thought they were God, thought I would have been out of office,” Mr. Amaechi said.

“By this time last year, men had collected money to remove us from office, but the God we worship never allowed it to happen. Now, they are the people struggling. We told them there will be this time, when they will be looking for our votes.

“I want to thank all of you and thank Rivers people, for accepting to make me your governor. I may not have been the best governor you have ever seen. I am not a perfect man at all, because I am human.”

The governor criticised the attack on some supporters of the APC in Asari-Toru and Khana Local Government Areas. He said they were on their way to the venue of the inauguration of the campaign when they were attacked.

He added, “When we came, we addressed insecurity. In the past, we could not have had our rally here. We are gradually going back to that. I hear today that members of the APC from Asari-Toru (Kalabari) and Khana (Ogoni) Local Government Areas were shot at on their way to this place.”

Mr. Amaechi accused the members of the Peoples Democratic Party, PDP, of believing in guns and that the APC members believed in God and man.

“Go and get your PVCs and vote for all APC’s candidates, beginning from Gen. Muhammadu Buhari; his vice; Rivers governorship candidate, Dakuku Peterside; and his running mate, Honourable Asita Okorie. We will make sure they win.”