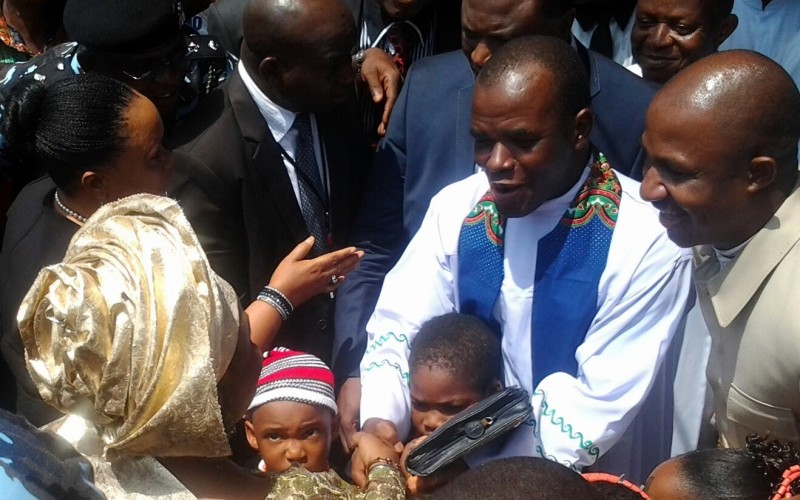 Fr. Mbaka received wife of the President, Patience Jonathan, few months ago, but said the Holy Spirit spoke to him that day saying something was not right.

Before his blistering New Year eve attack on President Goodluck Jonathan, with a demand he resigns or be voted out over Nigeria’s alarming insecurity and corruption, outspoken Catholic Priest, Ejike Mbaka, had a month earlier praised the president for “doing well”, defending him for not rescuing the abducted Chibok girls, a recording of the Church’s session shows.

At a November 2014 session of his Enugu parish, Father Mbaka told the visiting wife of the president, Patience Jonathan, that her husband had “done well”, and deserved a second term.

He said Mr. Jonathan could have done more if not for “distractions”, apparently referring to the security challenges the administration has grappled with for years.

The cleric also faulted those blaming the president for not rescuing more than 200 schoolgirls abducted from Chibok by Boko Haram militants more than nine months ago.

Campaigners had no reason asking the president to return the girls home since Mr. Jonathan was not keeping them, the priest said.

“Jonathan is not a kidnapper,” Mr. Mbaka declared at a session also attended by deputy senate president, Ike Ekweremadu, and thousands of worshippers.

A little more than a month later, the priest backtracked and urged Mr. Jonathan to “quietly resign” for failing to stem corruption and insecurity, and failing to provide jobs for Nigerian youth.

It is not clear why the priest reversed his earlier position just within weeks. PREMIUM TIMES could not contact his office Saturday.

But Mr. Mbaka’s blunt remarks on December 31 night appears a pointer to the uncertainties that may emerge as the nation moves towards February elections, which promises to be the nation’s most closely contested since 1999.

The comments have sparked extensive debate in the country, the most intense yet for 2015.

At the November session, Mrs. Jonathan was the special guest of honour as the Enugu Church marked its 2014 annual thanksgiving and bazaar. She took a Bible reading from Genesis chapter 12: 2-3.

Later, speaking directly to the First Lady as she knelt before the altar, Father Mbaka described her as a mother whose passion for Nigeria is widely acknowledged.

He said his ministry had always prayed for President Jonathan not only to win elections but to excel in leadership.

“We are not stopping, because we want him to go back. Even if you don’t come here, we keep praying for him,” the priest said, addressing Mr. Jonathan directly. “Because the first one we did you were not here. We are not sycophantic. Because you and your husband have done well, in spite of the distractions.”

On performance, he said the president had done well, and could have done better, but for the “distractions”.

“They are distracting you so that you will not achieve much,” he told Mrs. Jonathan. “You have done this without distraction, what of if there is no distraction.”

He assured Mrs. Jonathan to “Go with the consolation of the Holy Spirit. The anointing of the Lord says God will make your family great.”

While urging Nigerians to pray for the peace and unity of the country, the clergy lambasted those asking Mr. Jonathan to bring back the Chibok girls.

“Jonathan must bring back the Chibok girls. Is Jonathan holding them? he asked scornfully, before turning to query the kneeling first lady, “Are they living in your house?”

When the congregation responded with a loud “No,” the priest declared, “So anybody positioning the concept of Jonathan must bring back the Chibok girls, then such people are holding the girls. They should release them. Not Jonathan. Jonathan is not a kidnapper.”

Mrs. Jonathan later thanked the Church for the “spiritual intervention”, and said she was encouraged to “bring our people to the path of peace and unity at this time we are facing security challenges.”

Mr. Mbaka later offered special prayers for the first lady and her husband.

But barely a month on, the priest accused Mr. Jonathan of steering Nigeria almost to ruin.

“We need change, whatever it will be, let it be. This is my golden message to my beloved country,” he said in a sermon titled, ‘From good luck to bad luck’. “What actually is happening? The multitude of our youth; the quality young men, quality young women, brilliants youth – but nobody has plans for any of you, our so called leaders should come and apologise. In 2015, it shall not continue like that.”

Edged on by the crowed that cheered and screamed, the priest continued, “During election, Jonathan will answer Azikiwe, Ebele and become an Ibo man and after election, the Ebele, the Azkiwe and Goodluck will vanish from his identity. Who is fooling who actually?

The priest recalled the November session with the First Lady, and said the “spiritual drama” he performed that day, using pigeons, showed the president would lose the forthcoming elections.

He said four birds were freed from the cage to fly up but the one that represented Mr. Jonathan refused to move even though it was the healthiest.

“When God rejected Saul, David took over. Let me tell you, in the history of Nigeria, we have never experienced bloodshed as we have in the time of Goodluck. If Goodluck means bloodshed for Nigerians, are you waiting until your own blood is shed,” he said, as the crowad chorused, “No”.

Watch Father Mbaka praying for and endorsing Jonathan below.

Jonathan’s re-election only solution to peace in 2015​ –Akpabio​